What's on your mind?

Yo I haven’t checked the wiki in forever, but has anyone noticed the manga feels like it’s really veering towards comedic relief? I get that the “Yu iS an iDIot” card is a fun one to play but some of the jokes felt stiff to me. I feel like the art style is changing as well. I was wondering if anyone knew if there’s a new assistant or manager that’s involved in the series, because it just don’t feel like it used to. I found a good tumblr post about this as well 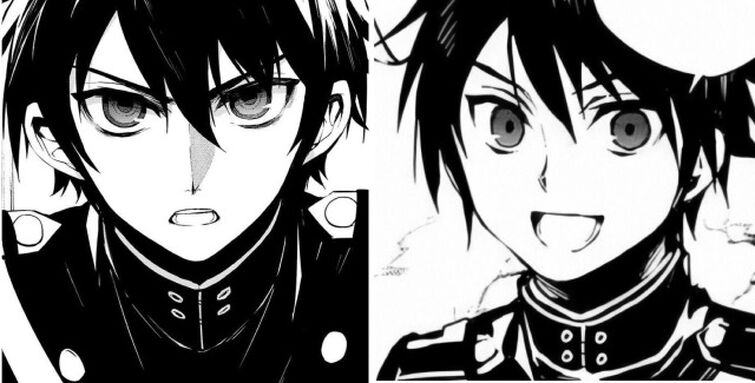 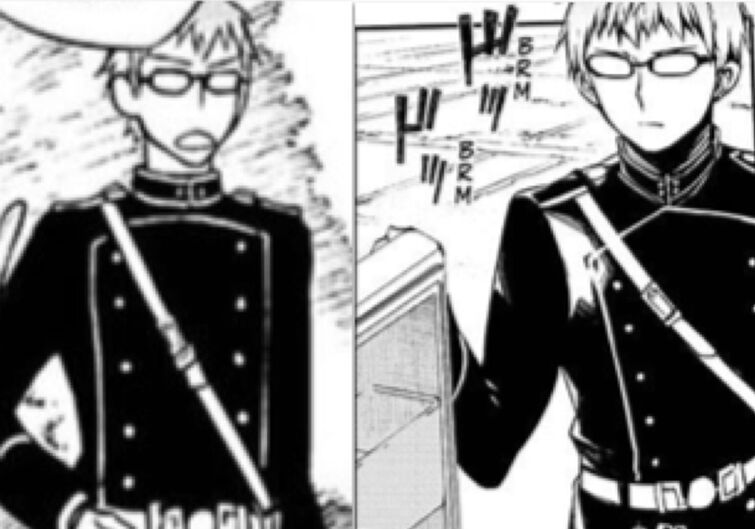 I did mention to the person I contacted about transitioning from traditional to digital art, which Twin Star Exorcists and a couple other series have done. I’m just wondering what’s going on behind the scenes. 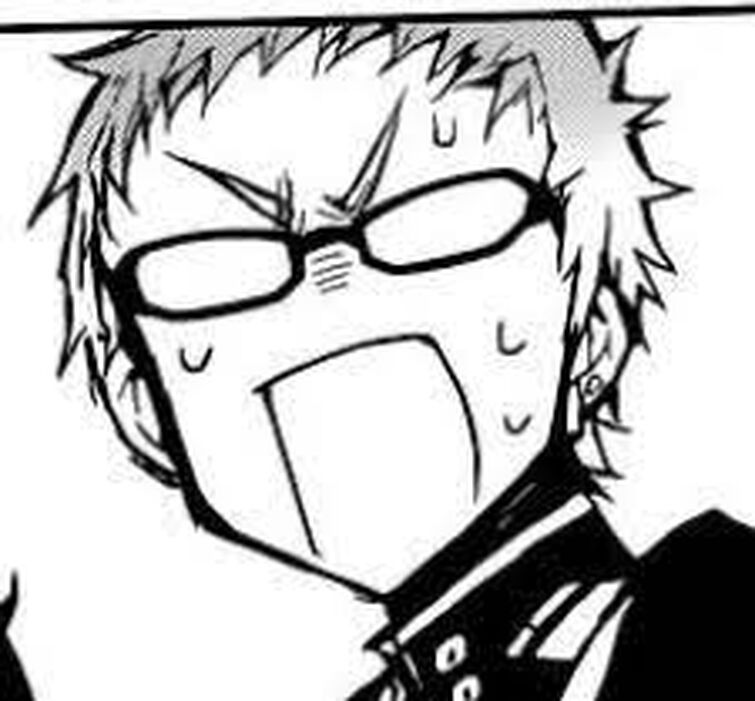 Here’s a zuki pic to make yer day better. Thanks for reading.

I stopped reading after chapter 98 and I'm trying to get back into the lore and stuff. Any important things that happened, especially on the Mika Yuu and Shinoa love triangle?! 😳

Yes, they should be allowed to explain and do it
No, it's better demon Mika is not with them 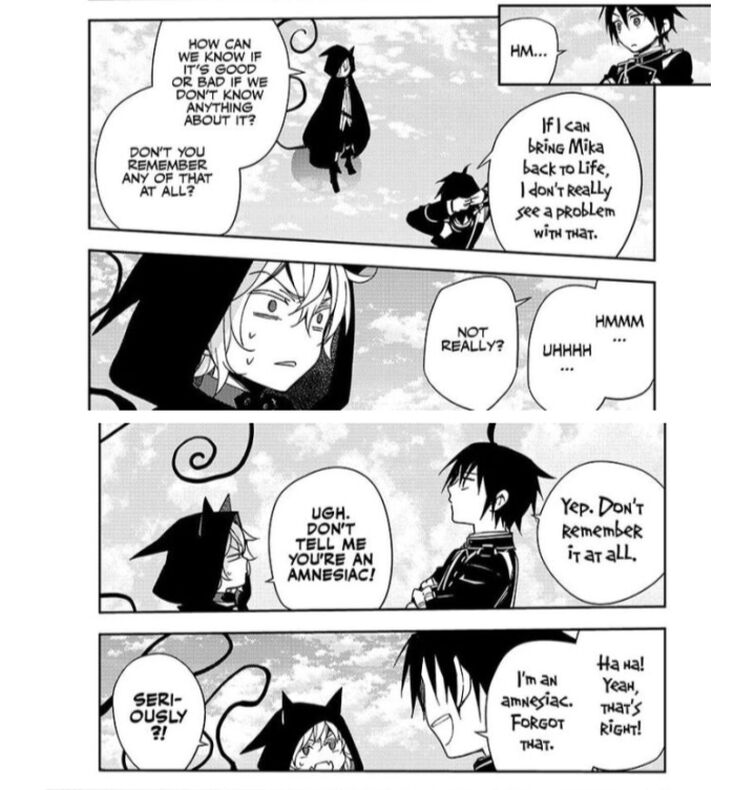 (edited by administrators)
Owari no SeraphVolume 23

Will Kimizuki and Yoichi recover enough to re-engage Sika Madu, can Yu and Mika fight against him, will they escape, could the demons share their plans? Guess away during this time when there's no idea to know!

I have this question for a while. According to Saito, the first Progenitor takes some 3rd Progenitors with him as his Apostles. Saito taunted that Lest Karr is incompetent but to be honest, I don't think so. Krul is 200 years older than Lest and she knows a lot about the first's plan as she, Noya and Ashera were together those times in the past yet both Noya and Ashera were chosen but she wasn't so it shouldn't be a problem about knowledge. Also, Ashera (as Asuramaru) once stated that he can't help Yuu fight the 5th Trumpet while we all know Angel Yuu is not stronger than Ky Luc (we can argue that his strength and speed is higher but he definitely isn't too powerful compare to Ky) so Angel Yuu shouldn't be stronger than Krul and Lest (I know Saito kinda bluffed that Ky Luc can kill a 3rd progenitor but I doubt that. Despite him being cocky around Lest Karr, he did restrained himself from hearing Krul and Lest). Either way, I think that in term of power, Krul and Lest should be on par Ashera. So if it's not knowledge and power then the only answer I can come up with is origin.

Make sure to add these to your calendars, guys! 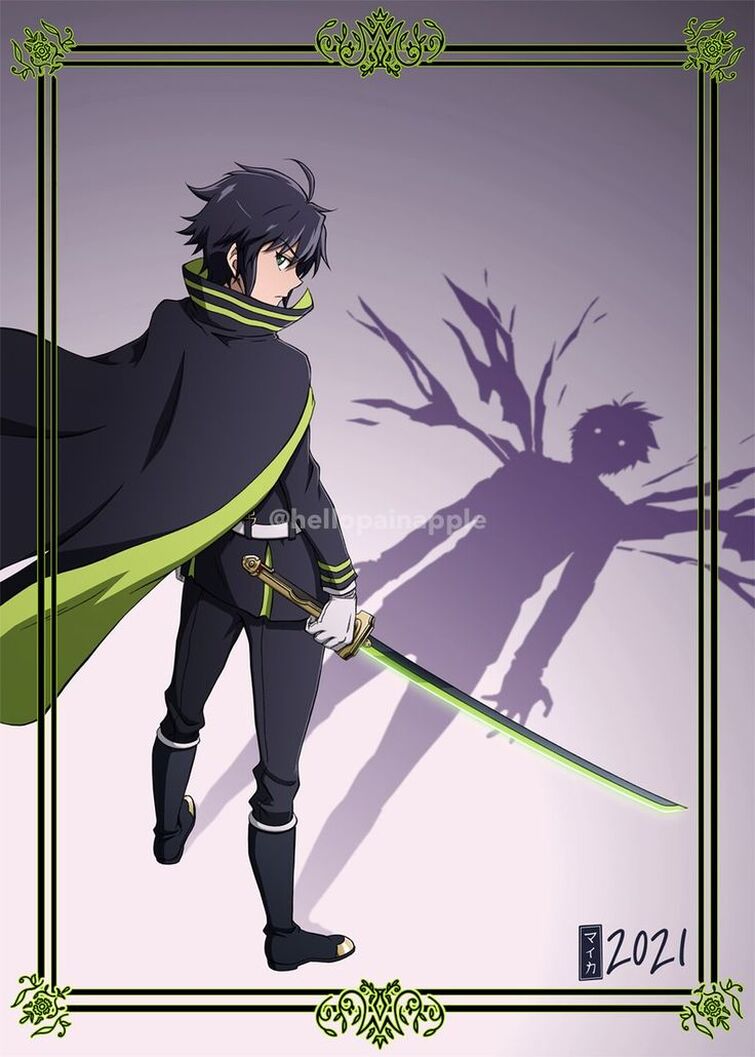 To one of the most cutest angels ever ^^

By JaegerLC (and from by best friend, Andre UwU) 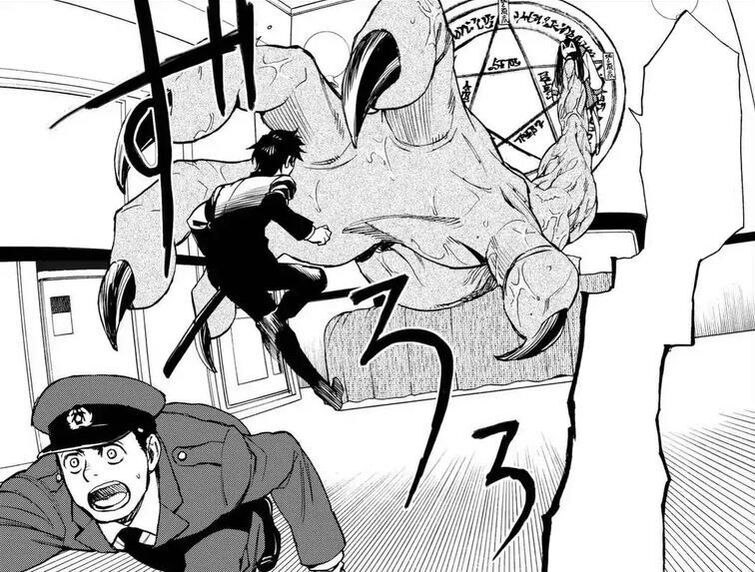 (edited by S3r0-Ph1i)
Seraph of the End: Guren Ichinose: Catastrophe at Sixteen (Manga)Guren IchinoseCharactersChapter 1 (Catastrophe)Aichi Police OfficerAichi High School Girl
5 - Amazing!
4 - Really good!
3 - It was okay!
2 - Some parts were nicer than others
1 - Other chapters are preferred

(for those of you who remmber me)

Isn't Kiseki-o a female demon or am I just getting my genders mixed up as I did when I initially met Asuramaru? When I read the wiki page it says Kiseki-o is a male but I thought Kiseki was female because the looks and voice sound like a female.

Can someone explain this to me please?

This is also going to be a part of a little edit video I've made for Yu's 17th birthday on Saturday! (Not sure how I'm gonna upload it though) 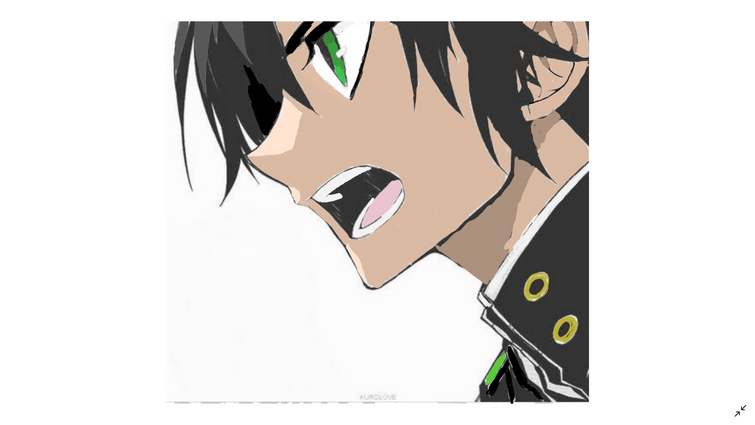 Okay, I've been planning to make this post for a long time, so I decided to do it today.

Around two(?) years ago, Byakkomaru's page was changed from Byakkomaru to Byakomaru, with one K. This was because Viz spelled his name that way in those chapters. However, I think it needs to be changed back to the two Ks, because the volume versions spell his name Byakkomaru again. Here's evidence: 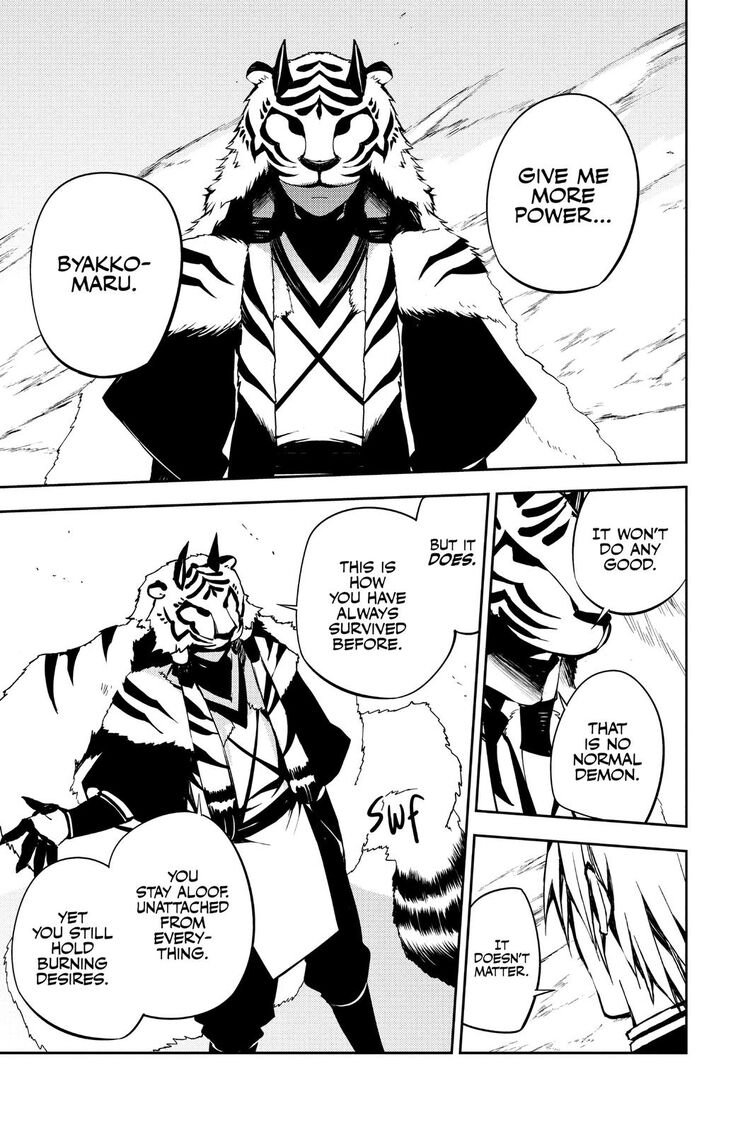 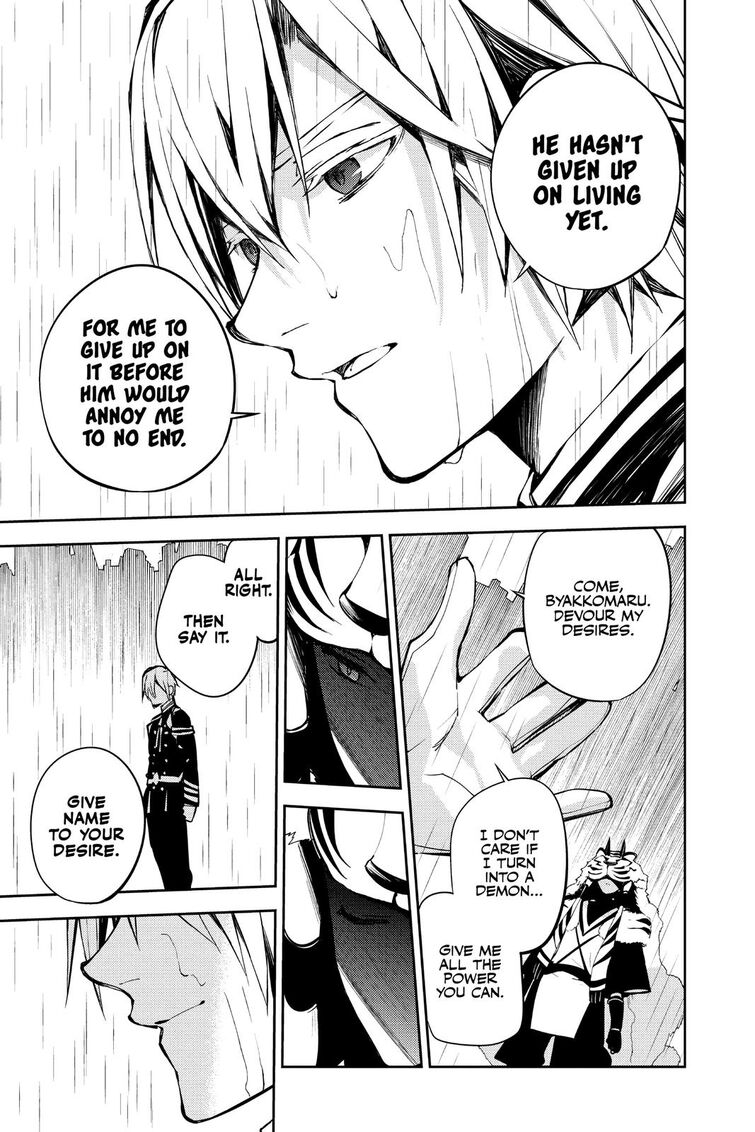 That's all I wanted to say thanks for reading. 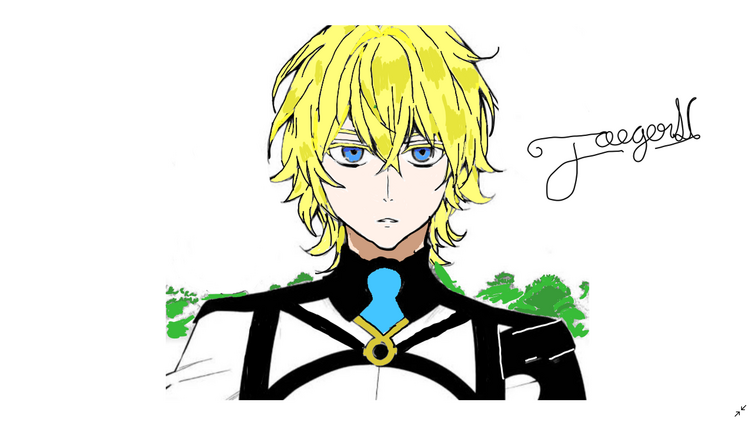