The Seraph of the End manga is incredible, the anime as well for different and overlapping reasons. Yet by virtue of being an anime further details can be provided, the creators have time to flesh out scenes more after reflection which is extra polish on the diamond series that Seraph of the End is.

So which additions in the anime do you like? Just going to leave this here: 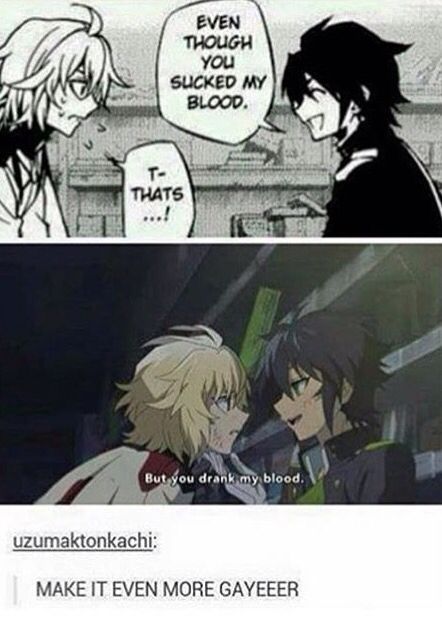 I think one of the best changes in the anime (in my opinion) is the end of episode 1. Unlike how Yu was mad in the manga, he was sobbing and more sorrowful, which I found to be more emotional (and realistic). The hug they added in with Guren is cute too, it showed how vulnerable Yu was. I also (don't know why) felt that it being winter at night was more fitting in terms of tone, unlike spring at day.

That's a good perspective! The manga was good at showing how utterly defeated Yu was with him slumping to his knees and yet you're right the final scene emphasised the angry tears in a way, rightfully so. The anime got to add more to that to increase the realism with what happened, we can't say right lost family now time for revenge, really sinks in the full extent of the loss.

The trees in the manga maybe were to show how everything is alive and well out in the world, and a great contrast that everything after all was fine on the outside, directly opposite to the horrible scenario that just occurred. That's perfect for the manga, and yet winter at night is also nice in the anime - two different forms of perfect! With the winter features it was the same when Mika found Yu again, if anything it's nice to see different seasons! adds more to the world.

Absolutely agree with Yu just run hugging into Guren, that is a key such a good thing the anime decided to add! Extended battle scenes with all the effects, particularly with the amazing cursed gear is another!😁

One of the glorious things about anime, full color and transition scenes to bring further to life major amazing events like that, love them!