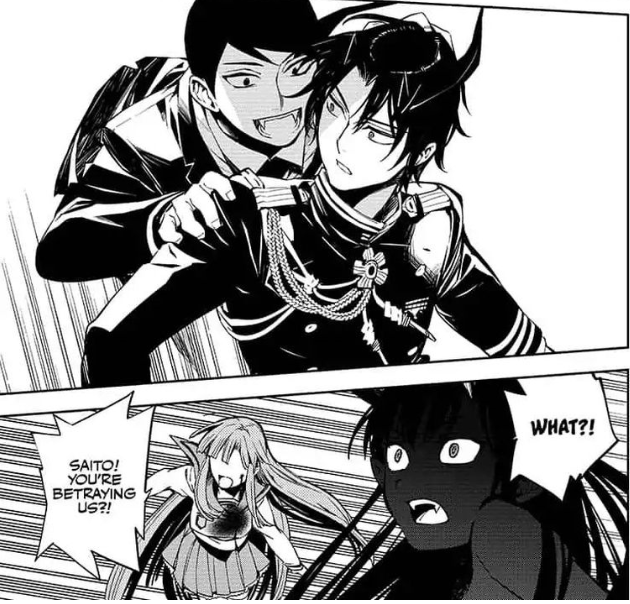 Along the lines of this post, everyone is free to upload images, if only to note ones like this scene to register how alarming this development was!

Chapter 84 has been released! | FANDOMIt is titled Nativity of a Princess and may be…owarinoseraph.fandom.com

Also a great insight into characters in the moment. Can only imagine the extent of Mahiru and Noya's shock, especially Mahiru's considering her past with Saito.

Then again is it a too convincing display, more notable since it is from a demon. Perhaps Noya was just pretending to be surprised but fully anticipated and was ready for the betrayal. Last second deception from an equally horrible monster to draw Saito's attention, blinding him to what came next? Share your views!

The lengths Saito would go to, it is impressive but in the most horrifying way 😬😱

"DON"T YOU DARE TO BITE HIM" was my first thought, after Ferid stucked him "you deserved it, pff" and later " I will kill you when I can, I liked you!" and then remembering pic from 2 volume resurrection, maybe he shows sympathy this way? Anyway it was sure thing he's gonna do sth, his smile is practically saying so!

It was quite startling, not to mention witnessing Saito leave his composure behind for the base desire of drinking blood. Quite the amazing scene in that sense 👍

Definitely, but best was "just joking. Ferid" cause it was the FIRST time any of them actually manage to trick Saito!

Oh that was FANTASTIC! Saito, even though he is against the first, is a lesser of two evils one still wouldn't want standing. So brilliant he has been taken down a notch especially after his betrayal.

Wonder if Mahiru and Noya were in on the plan, would show how much Guren tells them in his state, and would be funny if they were pretending to be surprised. Master of deception Saito met his match/es right there 😎

No response means I shouldn't so deleting :3