Chapter 114
Akihabara (秋葉原, Akihabara?) is a location in Seraph of the End. It is the location of many deceased humans known by Shinoa Squad, where the matter of the resurrection is raised.

Located some distance away from Shibuya, the building is clearly noted with Akihabara spelt in both Japanese and English on the side. The windows of the building are smashed in places, there are tall trees around. On a wall nearby are large posters appearing to display musical idols of some sort. While the exterior has been ruined as with other surrounding buildings, probably on account of the effects from the catastrophe, the interior is intact.

There are at least fifteen floors underground, with a huge spacious room on one floor. Large pipes cover a wall, with similar features along the ceiling. There is the space and technology available to contain many coffins with pipes attached to them. With it mentioned as a place that no one could touch them, where Shikama Dōji had recently been fended off, it would be probable that there would be some exceptionally powerful enchantments active, though none were seen or mentioned.

The area may have been evacuated and left with any survivors heading to walled cities under the protection of the Japanese Imperial Demon Army. While Mitsuba's parents and Tomoe Saotome may have been kept there, other deceased humans had been transferred to the location at undisclosed points in time. This included Yu and Mika's Hyakuya Orphanage Family being moved there from Ferid Bathory's mansion.

While likely not residents, the only current occupiers of Akahabara are deceased humans who have been transferred and are currently kept there:

Unlike other areas with advanced working technologies, there are no human operators seen at all. The area is barren of any type of activity, vampire or otherwise. While it could have been available beforehand, or because of its isolation it was a strategic area to establish, Akihabara had the means to contain the bodies of those deceased. Perhaps impractical to transport coffins and other technological equipment underground using the elevator available, the facility seemed equipped with the unseen means to accommodate this, in what may be more of an indication that it was prepared beforehand.

After Mika has been turned into a demon, and regained his memories, it is mentioned by Guren Ichinose that they were heading to an undisclosed location where no one could touch them.[1] After a Ferid driven truck journey, with Crowley Eusford present as well, the location is soon reached and revealed to be Akihabara, which is noted by Yoichi Saotome. At this location, Mika checks with Krul Tepes on whether her interests align with theirs. Taking a functional elevator downwards, there are fifteen floors seen by Mitsuba Sangū.[2]

Underground, Shinoa Hīragi observes the vast amount of coffins there. Directive arrows drawn by someone familiar with the squad are displayed. Here, the bodies of Mitsuba's dad and mom are stored. Where Tomoe's body was mentioned as having been kept, Yoichi finds his sister here. Everyone from Yu and Mika's orphanage family are gathered in coffins. Where Shihō Kimizuki is carrying the deceased Mirai Kimizuki, those here learn from Guren that there are three prices for bringing the world back. Clear there is a choice between resurrecting all of humanity, or Mika alone since he is the First's son, weapons are called. Cursed Gear is generated in the coffin room of Akihabara.[3]

The location of Mitsuba's parents, and Tomoe 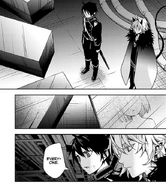 Yu and Mika's family had been transferred here