Owari no Seraph Wiki
Register
Don't have an account?
Sign In
Advertisement
in: Seraph of the End Anime Characters, Humans, Japanese Imperial Demon Army,
and 3 more

Aoi Sangū (三宮 葵, Sangū Aoi?) is a minor character in Seraph of the End. She is the older sister of Mitsuba Sangū and the servant of Kureto Hīragi. She is also part of the Sangū family, one of the three prodigious families serving the Hīragi Family. She is a colonel in the Japanese Imperial Demon Army. 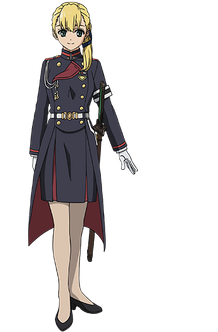 She wears her long straight shoulder length hair in a side ponytail on the left of her head, tied with a blue ribbon around the upper section. Her bangs are not parted and reach in between her green eyes.

Aoi wears the standard JIDA uniform for woman that covers all but her head and legs. The raiment consists of a long-sleeved black tailcoat with red details including the shoulder epaulettes, which has a fourragère around her right side connecting to the lapel of the coat, and two rows of gold buttons on the front. Along with that, she wears a pair of white gloves, a three striped armband on her left arm, and a white web belt buckled with a gold waist-plate. She also wears a slightly longer black skirt, and black heeled shoes.[3]

Whether by herself or with others, Aoi consistently has a stoic and vigilant demeanor. She often stands attentive, and unblinking in her official capacities. Aoi is ready to act on her own initiative by preparing her sword to block Yu's strike for Kureto or place her hand on the hilt to warn against perceived threats such as Shinya drawing his rifle. Without command she will kill Seishirō's guards as Kureto continues his advancement through the Hiragi family.

Acting in a manner that could be seen as cold and distant, such as glancing at Mitsuba then continuing without a word, to indifferently ordering someone to be stabbed, this behaviour is largely in keeping with a professional sense of following orders. Aoi is not cold inwardly, in one instance she has a messenger pigeon on her lap when she retrieved the note from it.

She is studious, it is Aoi that reads documents for Kureto and was aware of the means to leverage control over a demon. Aoi also has specialized knowledge on seraphs and was able to identify the title of the seraph from its attack as the King of Salt.

Aoi is beside Kureto Hīragi and Shinya Hīragi in a room where the lights have come on after Yu has killed a vampire in a test of loyalty. She looks at Shinya when he is advising Yu to not to listen to everything brother Kureto says when he is instigating a sword fight without the curse being activated.

Aoi uses her sword to block Yu’s who has attacked Kureto from behind as he walks away. She orders him to back off.

After Yu’s fight with Shinya, Aoi is overseeing these situations as she assists the Hīragi family find a suspected vampire spy somewhere in the army. With Kureto’s order to bring him along, Aoi walks over to Yu and takes his arm to have him comply with the order.

Inside a room with a one way mirror that has Shihō Kimizuki and Yoichi Saotome restrained in chairs on the other side, Aoi is a part of Yu’s ‘interview’ to get the truth as Kureto sees it. Aoi hands Kureto a binder with background information on Yu and stares relatively unblinking as he questions Yu on his past, starting with the black demon weapon he has. Indifferent as Kimizuki is stabbed by the guard behind him, Aoi remains fixed staring at Yu after Yoichi is also stabbed.

Aoi listens as Kureto delves further into Yu’s past growing up in the vampire city, and why Guren Ichinose took him in. She hears his link with the Hyakuya Sect, which was Japan’s largest spell craft organization that conducted human experiments on children from the Hyakuya Orphanage discussed. Aoi stands ever attentively as Yu considers Kureto’s offer of joining him instead of Guren.

With Kureto turning to her after Yu has said to let Yoichi and Kimizuki go right now, Aoi nods in understanding and uses the microphone to tell the guards they are all done here. Aoi stands outside the door and continues staring into Yu right up until the door closes on her when Kureto leaves.[2]

Spotting it, Aoi retrieves the note from a messenger pigeon from a child in the vampire city and reads it. In Kureto’s office she wordlessly hands him the note and is told to bring Guren to her. Aoi bows as she exits the room. Later she is stood in the operation level of a lab as the experiment on Mirai Kimizuki is underway.[3]

Aoi is nearby to Kureto as he receives news that the test subject will not be ready for transport until seventeen hundred hours. When Seishirō Hīragi arrives to observe Kureto under their father’s orders, it ends with the announcement that Kureto is to be arrested for lèse-majesté against their father. Without the command there, Aoi has already dealt with Seishirō’s two guards for Kureto by killing them both to leave Seishirō defenseless. She nods after an encounter with a soldier and informs the Lieutenant General that all of their squads will be ready to head out shortly. Aoi recommends that he leave in thirty minutes.

In a separate location Aoi stands some distance away from Kureto as crates are loaded into transport helicopters below. Regarding how the test subject is doing, Aoi replies it is a little unstable and seems to be in quite a bit of pain. Ordered to tell the scientists to increase the dosage to force the thing into submission, Aoi replies it is possible the subject will not survive another increase. She bows even when Kureto is not looking at her and says she will see it done. Asked whether there has been any update from Guren in Nagoya, Aoi answers that Guren says things are fine.[4]

On board a transport helicopter, Aoi is observing Mirai contained in a tank, with spell tag clad wires attached to her. Near Kureto, she holds a clipboard of notes concerning test subject A-0.[5] Landing at Nagoya airport, Aoi sees her younger sister Mitsuba nearby but only glances at her for a moment before moving on.

Standing perfectly still near Kureto as introduces himself and praises the Moon Demon Company, Aoi does not speak as Kureto questions Shinya what personality Guren had when he was captured by the vampires.

Ordered to do it, Aoi motions to a helicopter that brings forth a spell tag covered crate. When Shinya has his rifle materialize, Aoi is right in front of him with her hand above the hilt of her sword.

With Kureto’s order the Moon Demon Company survivors come under attack from what stabs out of the crate, a mass of long connected rods that are spiked at the end. Aoi remains stood as those before her are speared and killed. She remains inactive when Makoto Narumi is charging at Kureto in anguish over the death of his squad members Rika Inoue and Shūsaku Iwasaki. Aoi sees Yu approach Kureto and when he regards Yu as one of Guren’s black demon kids, she steps forward and orders do it. The rods are fended off by Shinoa squad but rather than pursue them, the Japanese Imperial Demon Army’s attention is drawn to the fleet of helicopters approaching. They come under a land based attack when a masked vampire noble has directed his forces to attack. Aoi remains near Kureto as Demon Army soldiers charge to battle.[6]

She remains near the container when Kureto tells Guren to begin after he has just kicked Mikaela Hyakuya into Yu. The rods stab into fallen human and vampire soldiers and turn red before the container they are coming out of violently explodes. Aoi is steadied by a member of the army from the force that is shaking the aircraft nearby before she considers what is coming. The wings unfurl to reveal Mirai who as a seraph blows a long golden horn to have jagged rocks erupt from the surface with the sky overhead darkened.

A black mass emerges from Mirai's back and forms into a gargantuan winged monster known as Abaddon. With Kureto’s prod, Aoi retrieves a set of three darts which are sent into Abaddon. After bubbling, blobs of flesh are broken off which bounce along the ground before materializing into Four Horseman of John.

When Kureto asks what that tower of flame is in the distance, Aoi informs him that they are getting new seraph of the end readings. They are coming from the fire. She it not sure what it means, but trails off if they fail to investigate it. Ordered by Kureto to destroy it, Aoi directs all units to move in and strike hard to destroy that seraph. Looking up, she instructs Abaddon to attack as well.

A torrent of salt has turned the Horseman of the Apocalypse into the substance that covers them before the attack becomes a large wave. It is only after Abaddon’s attack blasts through it and causing the power to freeze then melt does Aoi realize to her shock that the other seraph is the second trumpet. She urgently reveals to Lieutenant General Kureto that it is the King of Salt.

With Yu using his seraph based power to destroy Abaddon, the Imperial Demon Army is ordered to capture Yuichiro Hyakuya. The towering wide wall that Narumi has created using Genbushin has hindered that. Furthermore, Aoi warns Kureto that the vampires are coming and readies her sword.

Aoi in stood near an aircraft and after receiving an update, she calls to Kureto above that everything is in order and they are ready to advance.[7]

Being part of the prestigious Sangū house, Aoi is a highly talented fighter. She is quick with the sword and light on her feet. She easily killed Seishirō's aids in a matter of seconds, and extremely silently as well, as Seishirō himself didn't even notice her presence or the death of his aids.