Owari no Seraph Wiki
Register
Don't have an account?
Sign In
Advertisement
in: Seraph of the End Manga Chapters, Catastrophe Chapters, Volume 3 (Catastrophe)

39
Chapter 10 is the tenth chapter of the Seraph of the End: Guren Ichinose: Catastrophe at Sixteen manga.

Guren and Shinya along with Sayuri and Shigure, then Mito and Goshi as well are gathered and meet Aoi and Kureto. It is discussed how they Hyakuya Sect have been conducting experiments, and with a non-aggression pact breached, the Hiragi family cannot avoid war.

Shinya says to Guren long time no see and has heard he was refusing to go to school. Answering he always hated this school, Guren then raises whether Kureto called him too. Confirming it, Shinya feels it is scary and wonders what mission he will give. Sayuri and Shigure, along with Mito and Goshi are there, then Shinya mentions what if Kureto thinks they are all traitors. Deciding to just go with the flow, Shinya remembers himself younger armed with a sword surrounded by deceased children, and feels if they are killed in this place than that is the extent of their fate. Guren remarks that is not too bad, before the six of them enter through the double doors before them.

Aoi Sangū is there, and Mito asks why being familiar with her. Guren considers the Sangu family, along with the Jujo and Goshi are all under the headship of the Hiragi family. Aoi invites Guren in, who sees Kureto seated so asks whether he has become the principal. Remarking that he is late, Kureto states the next time they will punished. With an example requested, Kureto answers he is going to kill his subordinates one by one. Guren answers he understands, then Kureto explains his decisions are above the principals. If he wants the principal to die, he will obey without a word, and the same goes for Guren. Speaking that he is the king, and Guren is the servant, Kureto questions if he has got it. Answering this has already been decided from the start causes Kureto to comment that people are sensible. Directing them to sit down, Kureto instructs Aoi to get a cup of tea for everyone.

As they take their seats, Guren remains standing and replies to what is the matter by telling Kureto if he has something to say, make it quick. Telling Mito it is okay, Kureto says he likes the way Guren acts. The powerful man has no interest in anything other than the truth of things. While others keep whining, making excuses and depending on someone else, Kureto mentions that Guren is always tired of those things. Guren responds that Kureto is wasting his time blabbing about his philosophy of life. Aoi returns with a tray of tea and enquires whether Kureto would like a drink. Commenting that Kureto will drink before the guests, Shinya wonders what kind of education he has been receiving. Affirming that they are not guests, Kureto states he is more respectful of his obedient subordinates, that is why he is serving tea. Shinya turns to reiterate on how this is respect he said, to which Guren deems it cheap respect, before Goshi pleads for them to stop talking like that.

Chuckling that they are so funny, Kureto asks whether they want him to throw a wad of cash at them to show his respect. Directing him to not waste any more time and to just get straight to the point, a morning news story reports a related incident to the Ueno Zoo where an animal was killed by poison. Kureto answers Goshi this news is fake. According to the intelligence agency of the Order of the Imperial Demons, the entire area of Ueno had been turned into a testing ground for the Hyakuya Sect. An image shows a sizeable crater in the ground. Apparently there has been an incident that the Hyakuya Sect is desperately trying to cover up. Kureto has known for a while that they were doing some experiments, but he did not conduct the investigation because he did not want to go to war with them. Now however, the situation has changed, the Hyakuya Sect broke the non-aggression pact and the war has begun.

Asking if troops have been sent to investigate, Guren hears Kureto sent seventeen last night to carry out the work but they were all completely wiped out. Sipping his tea, Shinya is the only one who does not appear surprised. With Kureto having called them, Mito infers he wants them to act as the pawns. Quite the contrary, Kureto needs a team of talented people to go investigate. Feeling like he has been thrusted into a lot of trouble, Shinya raises whether a cup of tea is their payment. After Guren asks when they are going to start the mission, Kureto details two hours later they will have four squads breaking into the zoo from the Northeast. This is a decoy, those present will take advantage of the chaos and sneak in. Told he can take these documents with him, Guren replies no need, he has already memorized them. Questioning who will lead this team, Kureto answers it is their call so long as he gets the result. Shinya is fine with Guren since his subordinates only listen to him. Conference room 302 on the third floor can be used.

Kureto tosses the Hakushi sword to Guren. It is a demon sword, but Guren should be able to use it. Feeling the urge to kill in his head, Guren says it is definitely a demon sword. With Aoi moving in front of Kureto after Guren drew the blade, Kureto says he is an opponent she cannot beat. Speaking how Guren has already drawn his weapon, meanwhile he is unarmed, Kureto continues that if he wants to take his life, there is no better chance than this. Regardless, Kureto asserts but Guren still will not make a move. Kureto speaks that Guren's ambition is great, but the difference in power between the Ichinose family and Hiragi family will never be bridged, he has completely submitted to him. Answering yeah, and to go ahead and rejoice, Guren is told he is the one who should be happy since Kureto gave him a weapon. Stating it is good to see that he is able to honor his men, Guren adds it seems he is not that bad after all. Replying that he is a really funny guy, Kureto concludes that is all and he expects great news from them.

Goshi and Guren await in a room, while in the corridor Mito speaks over the phone of a top-secret mission. Speaking maybe it is dangerous, Mito mentions to her contact she will do her best, for the sake of the Jujo family's future status. Goshi raises how seventeen troops were wiped out, and are they not sending them to their deaths. Asking if he does not call his family, Guren hears Goshi has a younger brother who is doing better than him. Even if he died, Goshi is sure they will not care. Sayuri an Shigure are back having brought snacks. Talking about the mission, the target location is Ueno Zoo. The Hyakuya Sect has hidden something there, and their job is to slip in and investigate. With the seventeen casualties, Guren says that means the enemy may set up an ambush. While Guren does not have any information that would require a meeting in the first place, there is something he would like to try.

What Guren would like to try is slicing near Mito and Goshi's necks after drawing his sword. Sharing her disbelief that Guren made a surprise attack and that it is not fair, Mito hears if someone attacked her in a battle would they warn her beforehand. Having gotten and pretty good idea of their reaction speed, Guren will use that as a reference point for his orders. Knowing that Goshi is good with illusionary techniques and incantation, Guren says it should be useful when they sneak in. He advises Mito to cast a spell of her body to speed up her physical abilities, or they will kill her in a heartbeat before she knows it. When Shinya asks if he is going to test him, Guren replies if he ends up dead the high and mighty Shinya will become the laughing stock.

Bringing the special combat uniform of the Oder of the Imperial Demons, Aoi adds these uniforms have a certain amount of resistance to curses and have spell craft equipment implanted in them. A helicopter will take them to the scene, yet Guren observes as a covert operation they will go by car. Guren asks Aoi to prepare six sets of casual clothes, they will change into them when inside. After Aoi says she will have them ready right away, they then start their war.

At Ueno, Guren notes that there is not even the sound of birds. Wondering if they escaped or died, they await Mito with Sayuri and Shigure to change clothes behind some trees. While Mito warns them not to peek, Guren comments that they are so slow before Goshi shares it is a little scary that there are not so many people around here. Asked if he has been here before, Goshi is surprised that Shinya lives in Tokyo but has never been to the zoo before. They discuss taking a picture of the lions if they make it out here alive. With them ready, Shinya looks for the crater that was in the aerial photo. With the presence of spell tags possibly indicating a barrier to protect this place, the moment they step into it the enemy will launch an all-out attack. Although Goshi says he is pretty good at detecting spell craft, Guren says there is no need, once they go in they will be exposed.

Unable to leave until they find out what the Hyakuya Sect is hiding, Guren announces they do not have any choice but to keep advancing without stopping. In this situation they do not have any information, so a strategy is more of a hindrance than a help. Guren adds to kill the enemy in front of them immediately. As long as they do not die they can make it out alive. Checking a pocket watch and seeing it is time, Guren states they will go right away after the troops from the Hiragi family commence their attack. As the team leader, Guren only has one order, for them not to die. They then move out to formally commence their mission.

Leaping over a wall, Guren views inside a zoo enclosure a scene of blood but with no corpses. Taking the shortest route to the crater, they stand before the gigantic impact in the ground. Spotting a tiger in it, Shinya asks Guren what do they do next. Noticing them, the tiger's mouth opens for an extended horn like tongue to jab towards Mito. After Guren defends Mito by blocking it with his sword, he asks Shinya if he saw that. Shinya thinks he did, and with that, Guren and him are going to deal with it. With the others covering them from behind, Guren and Shinya move to engage the tiger. Shigure throws a kunai into its eye, and after attaching a spell tag to its right front limb, Shinya orders it to explode. Bringing his sword down, Guren decapitates the tiger yet it is still standing. They observe spiked appendages emerge from the neck and ask what is the fully formed thing before them. 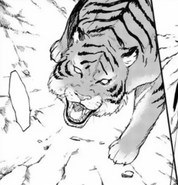 From the tiger a Horsemen of the Apocalypse is formed