Owari no Seraph Wiki
Register
Don't have an account?
Sign In
Advertisement
in: Seraph of the End Manga Chapters, Catastrophe Chapters, Volume 4 (Catastrophe)

18
Chapter 13 is the thirteenth chapter of the Seraph of the End: Guren Ichinose: Catastrophe at Sixteen manga.

Guren has his blood taken by Mitsuki who determines a curse is eating his body. When Guren is against human experimentation to find a cure, Mitsuki injects herself with a substance. Her hand becomes monstrous, and cut off before it can spread, the clawed limb develops eyes and a mouth, with a consciousness.

Capable of speech, the hand discerns that Guren is a demon too before it is cut apart by him. Scientists are in awe of this power and wish to study it further. Loyal to house Ichinose, more so after Sakae was tortured by the Hiragi's, where Guren remembers the end of the world will occur at Christmas and it is mid-August now, Guren speaks he will be the one to declare war.

With Sayuri and Shigure finding him, Guren states if they want to remain by his side they should close their ears to what is in the room. They mean to return to school in Tokyo.

Guren has three vials at least of blood taken from Mitsuki Iori. Enquiring as to when will the results come out, Mitsuki replies they have already started to investigate Guren's body and have some. There was a toxic reaction in his body, where Guren questions what kind of poison, it remains unknown yet it seems like an artificial poison. It seems to have been created in a way that is intertwined with the curse and they still do not know which curse technique it belongs to. Asking if it is some kind of advanced curse technique that their research institute cannot identify, Mistuki answers it seems so.

Questioning if Mitsuki cannot figure it out, she replies of course, it is the poison that is eating away at Guren's body. With the tip of the talon in a fluid filled tank nearby, Mitsuki states they are also working hard on the mystery of the piece of chimera which was sent to them by Shinya. Contemplating the words that he is not a human anymore, Mahiru is envisioned stating that Guren's soul already has a little bit of demon mixed into it, where she said for them to become demons together and immerse themselves in happiness.

After speaking about the poison of the demon curse, Mitsuki details that they will experiment this poison on human subjects and to please allow them to select some of their most devoted followers for this experiment. Saying how she knows that the main house of the Order of the Imperial Demons forbids them from carrying out such experiments, Mitsuki continues that to figure this out, before Guren cuts her off by stating she can't.

Asserting to just use him, Guren is going ahead with this research for the sake of his treatment. When Mitsuki says the poison has taken hold of Guren's body, and must be removed as soon as possible, Guren reaffirms he said no. Once experiments are started on people, the research cannot stop, a new curse, new experiment is a cycle to learn about new power which would leave an ever climbing pile of bodies. Live guinea pigs are nearby as Guren details how if their friends are used as guinea pigs then what happens after that. Mitsuki listens as Guren raises that being swallowed by their own power, or defeated by the Hiragi family, either way the result is destruction.

Mahiru's words that madness and violent demon thoughts dwell in the recesses of her mind, and the same applies to Guren. Speaking to Mitsuki, he continues that in any case they only need to find a way to nullify the poison of the demon curse. Appearing dissatisfied, Mitsuki proceeds to inject herself with a hypodermic needle. Knocking it away, Guren demands to know what she is doing. Answering that it is alright, Mitsuki explains her blood type is A, the same as Guren and she cannot let him become the test subject. Raising to look how nothing happened, Mitsuki details that the experiment has gone a little further where first of all she will use her body for this research.

Aware of a change, Mitsuki comments the power is amazing, before appearing stunned as her left arm swells into a large clawed hand. Guren reacts by instantly cutting the affected arm off, and after it falls to the ground it remains active. Now much larger than them both, the hand has developed three eyes on the palm and has formed three limbs on which it can stand on. While Mistuki voices how it is amazing, Guren orders it to die and strikes the hand with his sword. The hand being is capable of speech and after perceiving that Guren is also a demon, it questions him on that. Telling it to shut up and addressing it as a monster, Guren cuts it apart.

Other scientists enter, where Guren says to not worry about him but treat Mitsuki. In awe, Mitsuki has never seen this kind of power and feels they need to study it. Noting her observing the vanquished hand, Guren sees she had already lost her arm but was still having an expression of pleasure. The scientists gather to view the hand, while thoughts of insanity and the desire for infection are contemplated.

As a scientist reaches out to touch the hand, Mitsuki warns him not to, it is still contagious. From now on, they have to wear curse protective clothing when working. Stating that she is very sorry to Guren for letting him see her unsightly appearance, Mitsuki continues that this is how far their research has progressed and she will solve the mystery of this curse. After Guren questions if Mitsuki still wants to have a go after losing her arm, she replies humanity must keep moving forward. In order for the Order of the Imperial Moon led by Guren to become more powerful, Mitsuki states it is a necessary sacrifice.

When Guren questions if they are going to declare war on the Hiragi family, Mitsuki answers they are loyal to Guren's father, Sakae, but also loyal to Guren. Most importantly, even after Sakae was tortured by the Hiragi family they were even more determined. As Mitsuki mentions how they do not want to be humiliated again, Guren states that it enough and to shut up. Understanding, he will live up to their expectations. While Mitsuki and others are delighted, Guren says to keep human experimentation to a minimum, they will win, and with reason.

Considering victory, the Hiragi family is an organization that is 1,000 times more larger than them and Guren feels this is suicide. Mahiru's words that this year at Christmas, the world will be destroyed are recollected. The bells of the apocalypse will sound and the virus will spread. It is mid-August now, where Guren thinks there is no time to lose before the virus spreads and war breaks out. To those before him, Guren announces he will decide when to declare war. If they are going to do this, they have to do it by the end of the year. Thinking they that have got to get their hands on the power before it is too late, Guren speaks that this is it, quietly, steadily, and quickly.

Outside the room, Guren is called to by Sayuri who is accompanied by Shigure who questions what is going on. Scientists regard the hand nearby, and Guren states they do not need to know. Replying that they are his subordinates, Sayuri affirms they are here to protect him. Shigure adds if they do not have a good grasp of the situation they cannot protect Guren. Considering that they are the closest ones protecting him at the school run by the Hiragi family, Guren speaks that is why he keeps them in the dark about what is going on. When Shigure remarks it is no problem, if they get caught they will immediately commit suicide, Guren asks if she has the determination to do so, and to not underestimate the Hiragi family. If they know about the situation, then they cannot leave this room so if they want to be by his side then they had better cover their ears.

If it means they can stay with him forever then Sayuri and Shigure will follow Guren wherever he goes. Guren affirms they are going back to Tokyo, they have school tomorrow. 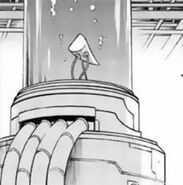 Lab equipment to identify the talon of the chimera

An injection of a substance drastically alters Mitsuki's hand 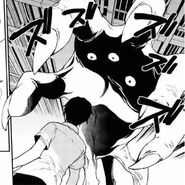 Guren before Mitsuki's hand that has formed into an independent creature