Owari no Seraph Wiki
Register
Don't have an account?
Sign In
Advertisement
in: Seraph of the End Manga Chapters, Catastrophe Chapters, Volume 4 (Catastrophe)

36
Chapter 15 is the fifteenth chapter of the Seraph of the End: Guren Ichinose: Catastrophe at Sixteen manga.

Guren arrives at his destination by motorbike, with Shinya arriving shortly after. From a tree they mean to observe a scene at the tennis courts. With night vision goggles they can see men resembling the Hyakuya Sect assassins. These come under attack by a female vampire, where their chain weapons are of little help.

Guren and Shinya are further shocked where the vampire sees them from her distance. Making it to the motorbikes, yet finding the vampire in the road before them, Guren's bike is caught but he is saved by Shinya. Speeding away, the vampire catches up, however Guren can unleash a power from his sword that splits her arm in half upwards.

Successfully escaping, they consider that the vampires could deal with the Hyakuya Sect, then whether Mahiru is at the center of it. Thanking Shinya for saving him, Guren states he trusts him a little. Making it home, Sayuri and Shigure are shocked at the blood on him. In the bath, Guren wonders if what he is doing is considered strong or weak.

At 1:30 am, Guren has arrived at Hikarigaoka Park via a motorbike. Joining him on one of his own, as expected Shinya finds Guren here. Asking if Guren has a license to ride a motorcycle, he answers no, where the motorcycle is also stolen. Shinya knew it that he was driving a stolen motorcycle, which Guren puts down to youth. Entering the park with night vision goggles is not the kind of youth Shinya wants, which is what he and Guren and doing.

Noticing a couple at a park bench, while Shinya wonders if they are flirting with each other, he notes they have a few minutes before the rendezvous and asks if Guren is going to set an ambush. Answering no, Guren regards a spell tag placed on a tree. Wondering if it is a trap spell, Shinya sees Guren up in the tree and questions if he is peeking at an erotic couple from there. When Guren answers yes, Shinya states he is always mocking him. Asked what he is mocking him for, Shinya replies it is up for him to decide.

From their vantage point in the tree, Guren and Shinya focus their night vision goggles to view the tennis court area some distance away where a meeting is to take place. Men in uniform are stationed, which look like the Hyakuya Sect fighters who attacked at the school before. Envisioning Saito with his chains deployed, it is thought if they are as good as him then they do not stand a chance. Checking his watch which reads around 1:45, with fifteen minutes left, it is wondered should they still go for talks or not.

Seeing the men react, one is decapitated by something unseen. When a vampire drops among them, Guren wonders why one is there as he watches from afar the agents generating chains to engage with this foe. The chains coming out the agents strike into the ground as the vampire leaps to avoid them, and seizes the head of the man whose shoulders she lands on. Running along the chains, the vampire deals with the final man by biting.

As Guren notes that all the black suited men were killed in an instant, the vampire looks towards him. Startled that she is onto them, and feeling it should be impossible at this distance, Shinya and Guren drop from the tree. Running to their motorbikes, in the road they find the vampire appear in front of them. Driving into her, the vampire grasps the front tyre of Guren's motorbike. Hurtling backwards, Guren finds the back wheel of the motorbike thrown at him, and with it nearing his face he thinks of death. After Shinya calls for him to take his hand, Guren is pulled out of harms way as the bike crashes into a car.

While Shinya drives, Guren is back to back with him and flings spell tags at the vampire pursuing them. Stating that she may be closing in on them, Shinya notes they are driving at a speed of 100kph. As the vampire leaps into the air, Guren readies his sword. If they can survive this attack then they will be able to escape while the vampire lands. In her descent to them, Guren considers how the members of the Hyakuya Sect were slaughtered in an instant by this vampire and he wonders will his attack work. Thinking of Ferid, he registers even Mahiru was not a match for him.

Called to by Shinya, and having no time for hesitation, Guren swings his sword, which the vampire takes the blade in her hand. She smirks, before Guren unleashes a darkened energy to sweep across the vampire which splits her arm in half along its length. Speaking for Shinya to move, they speed away while the vampire lands to consider the state of her arm. Asked if she is still chasing them, Guren slips and is told it is too early to get distracted.

Seeing the truck ahead turned right, Shinya orders Guren to hold on tight as he passes by the vehicle. In a neighbourhood like area, Shinya questions if she is not here. When Guren replies maybe, it is not a reassuring word. Noticing his right eye, Shinya asks if Guren got hurt by the vampire. He replies it is because Shinya is a terrible driver. When Shinya says he will take care of it, Guren parries his hand and speaks he can do it himself. Thinking how his blood is cursed, Guren would not know what would happen if someone touched it.

Mentioning that if Guren does not treat it properly that it will leave a mark, Guren thanks him for his concern, and is asked then how can he get married. As Shinya speaks how that it as really bad back there, Guren thinks about Ferid mentioning that the world is going to end quickly if humans touch a particular forbidden spell, and wonders if the vampires do not like the experiments that the Hyakuya Sect is conducting where the Four Horsemen of John chimera is envisioned. Pondering the matter as well, Shinya remarks how if the vampires really had their eye on the Hyakuya Sect then would they not be wiped out in no time.

Considering that the desires of every organization are intertwined, Guren thinks it is not as if the truth is out there. Then, Guren speculates that perhaps the one at the center of it all is Mahiru. Where Shinya is conscious that the whole thing will end without them knowing, Guren agrees, yet answers he is going home. Affirming okay, and he will see him at school tomorrow, Shinya bids Guren goodnight. Stopping, Guren raises how Shinya saved his life today where if it was not for him he would be dead. Determining that this means he owes him a favor, Guren answers he does not feel like it, but he can trust Shinya a little now. With Shinya mentioning a little, Guren affirms just that. Thanking him for that, they will see each other tomorrow.

Surprised at his state when he returns back, Sayuri asks why Guren is covered in blood. Having her stay back since his blood is tainted, Sayuri does not care. Saying to mind her own business, Guren tells Shigure to run him a bath since he needs to wash off the blood. Embracing him, Guren speaks they are going to get a lecture later, they need to get back to Aichi right away and have it inspected. Thinking how nothing happened, Guren wonders can it be transmitted by contact or is it a matter of quantity. Asking if he is coming with them, Guren answers he will stay here. When Sayuri and Shigure decide they will stay with him, Guren replies to not be silly and listen to his orders.

With Sayuri and Shigure not going, Guren thinks luckily he did not bring them along. Imagining the scenario of the vampire holding a head, Guren considers if he had of taken them with him they would be dead. After Sayuri asks him what is wrong, Guren says it is nothing, he just wants to take a bath and get some sleep, then declines her offer to help scrub his back. In the bath, Guren's thoughts concern the death of companions. Envisioning Mahiru walking with a trail of blood from her feet, Guren contemplates how if it is her he is sure she will cut them off.

Guren thinks on the question of whether he is going to turn into Mahiru. He remembers Shinya's words that he does not see it as a weakness, then if he made the same choice as Mahiru then they would not need to save her. In some pyjamas, Guren sees Sayuri and Shigure sleeping in bed together. With thoughts of not for purpose, or ambition, it is not like Guren is risking his life for someone else, where he wonders is this considered strong or weak. 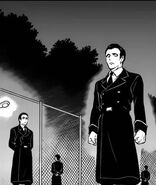 The agents attack a vampire who appears 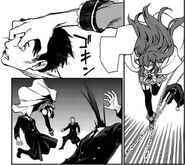 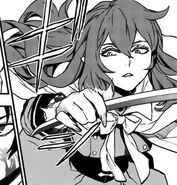 Catching up to Guren and seizing his sword