Owari no Seraph Wiki
Register
Don't have an account?
Sign In
Advertisement
in: Seraph of the End Manga Chapters, Catastrophe Chapters, Volume 1 (Catastrophe)

49
Chapter 3 is the third chapter of the Seraph of the End: Guren Ichinose: Catastrophe at Sixteen manga.

Saito's offer for Guren to join the Hyakuya Sect and crush Mikado no Oni and the Hiragi is rejected. In the school corridor, Guren's failure to protect Shigure and Sayuri from Seishirō's violence is viewed unfavourably by Shinya, then Mito and Goshi too. Outside a convenience store, Guren observes Mika heading inside before commenting on Saito's different name. Saito reveals that a man made virus is planned to be released. He shares his intent for the Hyakuya Sect to go to war with the Hiragi family to prevent that.

The Hyakuya Sect is a sorcery organization that was said to be supported by a secret division of the country. It has supported the country from the shadows with many politicians receiving aid from it, and has engaged in skirmishes with the Hiragi to determine who would back the ruling power. Since World War 2, the Hyakuya Sect, supported by America, is now the backbone sorcery organization of the country. Saito stands in the elevator and informs Guren he has heard that the goals of the Hyakuya Sect and the Ichinoses are the same, to crush Mikado no Oni and the Hiragi. Not interested in the power Saito offers him, Guren says he wants first prize but if he joins them they will take that, then the Hyakuya Sect will ridicule the Ichinose. Since Saito has seen his true ability, Guren means to kill him. While Saito replies Guren is unable to, as energy amasses around him, he elects to go back for now and pushes the elevator button to depart.

As Guren considers the Hyakuya Sect and whether there will be a war in the future, Sayuri Hanayori finds him. Shigure Yukimi joins them too and asks Guren if there is something wrong. Outside, students practice combat and Norito Goshi has punched Guren over, where is praised by a student. Mito addresses Guren on whether he feels vexed when students talk about him as they are, and draws Goshi's ire with her comments on his family before they clash. Shinya approaches Guren having been watching him for the past ten days, and asks if he would like to spar with him. Resorting to a magical rune based power, Shinya strikes Guren with an impact that hurls him upwards into the air. After he lands, Mito is worried that blood is coming out of Guren's mouth. Goshi is also concerned, while Guren thinks even if he broke a rib he angled himself to ensure his vitals would not be damaged.

In the infirmary, Guren wakes up bandaged before Mahiru enters the room. As children, Mahiru placed a flower crown on Guren's head. Presently, Guren warns that if Mahiru gets close to a person like him, her father will be angry. Affirming she is different from the past, Mahiru states she can make her own decisions. While Guren is not talkative, Mahiru mentions she heard that the skill appraisal rating of him has been awfully low. Guren speaks that Mahiru has become strong and beautiful over these ten years. Saying she is here to ask about his injury, Mahiru is then congratulated by Guren for her engagement to Shinya. With neither at ease, Mahiru departs.

Tomorrow will be the start of the weekly academic acceleration examinations. Shinya leaves the class with Guren where Sayuri and Shigure are waiting. Mito comments on Guren bringing along two women as attendants. Goshi wants Guren to introduce him to them. In the hallway, Guren sees a darkness ahead. Seishirō Hīragi kicks Guren away and claims his foot slipped. After Yumi stops Shigure from hitting Seishiro, his punch in turn is prevented with Shinya's intervention. Seishiro hits Shinya in the face, then announces how he will win the second round of the academic excellence examination, because the others are just rats. With Shinya angered, he says Guren really is weak for failing to defend his friends. Mito and Goshi also react negatively and leave as well. Guren considers Seishirō, and for him to be in the same year as Mahiru they would have to be siblings with different mothers. Guren wonders to what extent will his power work.

Outside a convenience store, Guren hears Mika ask Saito whether it is really okay for him to buy any sweets he wants. Mika wonders what he should buy to make everyone at the orphanage happy. Answering Saito that he will be fine by himself because he is eight years old, Mika heads inside the store. Guren speaks with Saito on how he said his name was Kajima, who replies he does not have a real name. Feeling simply put he is an assassin, Guren asks Saito what he is using that kid for, the Hyakuya Sect is famous for their human experiments. Saito speaks that the Hyakuya Sect wants to guide this country to the right path. If Japan keeps on going like this, it will collapse, caught up in the trumpet of the end. After Guren questions if using that he could solicit him, Saito shares that a virus will spread, the world will become uninhabitable. It is a story about war. The one who made the virus is not god, but humans, and Saito states these are humans Guren knows very well, the Hiragi.

Mikado no Oni, who stole the seat of the National Magic Organization from the Hyakuya Sect is running wild. No one can touch them as they practice forbidden magic. Sharing that they are trying to prevent it, Saito questions Guren if their interests are not in agreement. Before the world ends, they should strike a blow against the Hiragi. Saito reveals that in ten days the Hyakuya Sect will go to war with the Hiragi, he needs a reply from Guren now. Giving an answer of no, Guren cannot join hands with someone who cannot hold a decent conversation. Mika returns, stumbling with the goods he is carrying in a bag. Asking who Guren is, Mika hears from Saito that he thinks Guren is a pervert. As Mika and Saito head on their way, Guren contemplates how in ten days the Hyakuya Sect and the Hiragi will go to war, which could ruin the whole of Japan. Rather than wonder how others would conduct themselves, Guren thinks how can be become number one.

A student speaks highly of Goshi 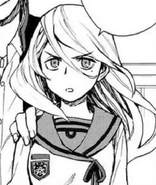 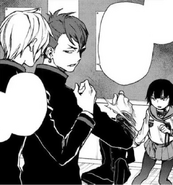