Owari no Seraph Wiki
Register
Don't have an account?
Sign In
Advertisement
in: Seraph of the End Manga Chapters, Catastrophe Chapters, Volume 2 (Catastrophe)

44
Chapter 4 is the fourth chapter of the Seraph of the End: Guren Ichinose: Catastrophe at Sixteen manga.

Outside, the selection exams take place. Referees observe students battle against one another. Mito defeats Shigure, then Goshi along with Shinya and Guren make use of their advantages to win against their opponents. Seishirō is abusing Sayuri by ripping her clothes and beating her when she is defenceless. Mahiru intervenes and assists her.

In the school field Goshi and Mito discuss the selection exams that take place over a week for the student population, and they are not allowed to lose to those outside their class. The referee will decide who wins and loses, if someone is killed, their skill rating will fail. After first year, class 9's Midori Sugiyama is declared the winner, Guren notes class 2 is next, which is Shigure Yukimi's class. Finding that her opponent is Mito, and ready to fight her, Shigure states she will not use Ichinose style magic since there is no reason to reveal their hand to the enemy. As Shigure prepares a kunai, Guren observes Mito using spells to raise her body to its physical limits and wonders if it is vajrayaksa myouou. Goshi and Shinya are eager to watch the battle. Although Mito can evade Shigure's kunai, even as they rebound towards her back, one wraps round her wrist with a spell tag on the thread administering debilitating effects. Managing to break free, Mito punches Shigure over and is announced the winner, but asks the referee to make it a draw. Afterwards, Mito apologizes to Shigure for her remarks before and questions if she would like to join the Jujo house.

The next match involves Goshi against a student armed with a sword. Goshi wins, and Guren remarks on his fast movements, before Shinya says they were not. Guren then registers that Goshi used illusion magic. Shinya from class 9 is up next and his opponent agrees they should have an exciting fight. When his spell tags are rendered useless, Shinya is announced the victor and he raises with Guren how he does not understand how he won. Guren guesses when Shinya was talking he inserted magic at specific points to interfere with the opponent's spell, causing it to fail. Deeming the way Shinya fights to be rather detestable, Guren wonders if it comes down to a fight would he be able to kill him. Guren is to face someone wielding a spear. While he purposely fights clumsily, a sword parry is enough for Guren to win.

Hearing a scream, it transpires that Seishirō is abusing Sayuri. After ripping her clothes and beating her, Seishirō draws his sword yet has it blocked by Mahiru. After Seishirō is announced as the winner, Mahiru helps Sayuri down. When Guren takes her, Mahiru does not want to hear his apologies on how he could not protect a girl.

Norito Goshi and his opponent

Shinya Hīragi against his opponent 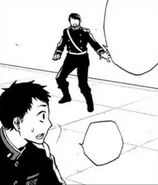