Owari no Seraph Wiki
Register
Don't have an account?
Sign In
Advertisement
in: Seraph of the End Manga Chapters, Catastrophe Chapters, Volume 3 (Catastrophe)

41
Chapter 9 is the ninth chapter of the Seraph of the End: Guren Ichinose: Catastrophe at Sixteen manga.

Guren is coerced into becoming Kureto's subordinate. Exiting the torture chamber under the gym, Guren does not entertain friendship with Mito or Goshi. He also considers Sayuri and Shigure dying if he is to become stronger than the Hiragi family and Hyakuya Sect, the latter whose activities are reported on the news. Having not been going to school, Guren is ordered to do so by Kureto. Student's views of him have changed, and Seishirō ceases his attack on Guren after accepting his lie that Tenri entrusted Guren with the news that Kureto is suspected as the traitor.

Kureto orders Guren to make his choice. Shall he kill his whole family, to which Guren finishes the sentance or he swears allegiance to Kureto. While Guren states that is pretty arrogant, Kureto replies that is the Hiragi way. Saying to first get him some water, Kureto asks does that mean Guren accepts his offer. It is not like there is much of a choice but Kureto tells Guren not to worry, he does not mistreat his subordinates. Kureto orders the interrogator to release Guren's restraints, only to witness Guren’s wrist crack then slip out of the restraint. Kureto comments that Guren is a bit gaunt, so says to go ahead a rest for today, he will begin his duties tomorrow. When Guren comments that Kureto is acting like his king, he replies from now on even his future children, for all eternity belong to the Hiragi family.

After the door is slammed shut, Guren considers the Hiragi are powerful and the Ichinose are a weak branch family, how does he turn this around. Envisioning Mahiru, and the path she chose and the one left behind, Guren thinks about his own path. At the top of the stairs, Guren sees the torture chamber was underneath the gym. Mito spots Guren and calls for him to wait. A circle inscribed within an equilateral triangle is formed on Mito's head, and since Guren made a fool out of her she is going to attack. Aiming punches at him, Mito questions is he planning to hide his powers again this time. After Mito supposedly trips, and asks why he hid it, Guren answers if they knew he would still be bullied. Regardless of the power he has, Guren speaks he is still an Ichinose. Struck at how many students were addressing him as Ichinose scum, Mito notes she said a lot of cruel things to him. While Mito also feels he was laughing behind her back, Guren replies he does not care about her enough to laugh.

Finding Goshi waiting for him, who observes Guren saved his life, rather than serve him Goshi states he will be Guren's friend instead. While Guren says the deal is off, Goshi pouts before saying that he was not supposed to help him or that girl back there, there was no point what with Guren playing the fool. Asking why he saved them anyway, Goshi answers that it is because Guren is a pretty good guy. Walking by himself, Guren ponders why he did save them, why could he not stand to let two people die in front of him, that weakness could be deadly. As they are imagined deceased, Guren considers even if it means giving up Sayuri or Shigure's lives, if he does not have the strength to abandon them, he will not have the strength to fight the far more powerful Hiragi or the Hyakuya Sect. Guren thinks he cannot let useless emotions hold him back.

While mulling over the words that he is a good guy, Mahiru is envisioned as Guren feels surely she has given up on that by now. With 05:30 on a digital clock, Guren wonders how many days he has been avoiding school. Shigure bids him good morning then questions if Guren will be going to school today. While Shigure mentions the torture the other day, Guren replies it was not even that big a deal as he watches television. Shigure will never forgive the Hiragi to go so far as to torture him. Guren says the problem is not the Hiragi, it is that they do not have enough power. Adding it is not Shigure's fault, rather Guren feels it is his for lacking the strength. Sayuri announces breakfast is ready and after they eat Guren resumes watching TV.

The phone rings and Guren answers to speak with his father. After sharing how things are, Guren's father says to turn on the news, a story that the Hyakuya Sect has been trying to keep quiet is about to break. A news reporter details the shocking report that yesterday all the animals at Tokyo's Ueno Zoo were killed by an unknown suspect. On the phone, Guren’s father shares it is said that someone spread poison throughout the zoo. Supposedly the poison might still be there, so the authorities sealed everything within a half-mile radius. The story actually broke around 2am, but the Hyakuya Sect kept it under wraps. While Guren’s father does not actually know what happened, he does know it is true that the whole area is blocked off.

As Guren wonders what the Hyakuya Sect are planning, he receives a call from an unknown number. It is Kureto, seated at a desk he has heard Guren has not returned to school. Guren jokes whether Kureto is sad that he cannot bully him, before asking what he wants. Instructing him to come to school today, it is an order, Kureto says he will tell Guren if he comes then to meet him in the student council room at 9 o’clock. Sayuri and Shigure are listening in and hear Guren intends to go.

Heading into school, Shigure remarks that someone should have thrown a bottle of cola at them by now. Students appear nervous, and one youth says he was sorry about before, he did not know he was Kureto's subordinate. Pleased that everyone already knows, Guren answers Shigure and Sayuri that when being tortured he was not forced to work for Kureto, it is the same as always where they were always beneath them. Sayuri helps Shigure understand that Guren is the same as usual, and they simply protect and serve him.

Seishirō is waiting, along with Yumi. Dashing forward, Shigure and Sayuri are thrilled to hear Guren say he does not have to keep his powers hidden anymore. Boasting that he does what he wants, Seishirō asks others around does it feel strange to just let the Ichinose scum become a subordinate. With students taking their leave, Seishirō shouts that they are supposed to laugh. When Seishirō moves to punch Guren, he finds a spell tag placed over his throat. Guided to be quiet, Seishirō hears Guren share he has secret orders from Tenri Hiragi. He is the head of the Hiragi family, and father of Kureto, Seishirō, and Mahiru. Continuing the lie about being given a secret mission by Tenri, with the Hyakuya Sect's attacks, Guren says Tenri believes that there is a traitor in the family. Seishirō feels of course his innocence has already been proven when told as much. There is someone who has not shown their true colors though, and while Seishirō asks if it is Shinya, he hears from Guren that it is Kureto. The idea is that Kureto did it to get rid of Mahiru, who is also fighting as the secondary candidate.

Demanding to know whether his father thinks that, Guren answers Seishirō that Tenri confided in him personally. As Seishirō remarks that he sees Tenri regards Guren quite highly, Guren thinks to himself he got Seishirō for believing the lie. Continuing that the world seems to accept Kureto as the next candidate for the head of the house, Guren details he thinks Tenri does not fully trust him. As he speaks for Seishirō's future and what Guren was hoping for, Seishirō interjects to raise whether he sucking up to him. If that is the case then Seishirō thanks Guren for telling him. Asking what he should do, Guren does not want Kureto to know, so Seishirō punches him to maintain this new pretence. After he departs, Guren contemplates how if Seishirō begins to act strange with what he now believes, then suspicions of being a traitor will turn to him.

Sayuri and Shigure say to Guren they thought he could beat that disgusting guy up for sure. Guren replies he could not possibly plan to finish the guy who beat up Sayuri like this. Asked what he did, Guren answers if they did not see anything then he is not going to tell them. His subordinates may be tortured and forced to ingest a truth serum, so Guren elects to not tell them things if they do not need to know them. While Sayuri replies that will not be a problem, they have been trained to think of a way to commit suicide before the torture, Guren affirms that is exactly why. Saying if he does not tell them this now, they will not have to kill themselves so easily, Guren envisions them deceased before saying he will ask for their help after all this has progressed a bit.

To himself Guren thinks with this, the gears have been set into motion. The world will be destroyed on Christmas. Right now it is June, there are only six months left. Considering their days at this school are numbered, Guren contemplates how they might have to join in the war. Even if they do not die, others will. With it about 7.20 on the school clock, Guren thinks so until then how about they enjoy the last frivolous moment they have in their school life. It might just be their last chance to wear these uniforms. 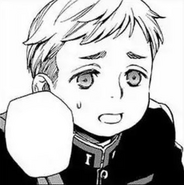 The student who says sorry to Guren Ichinose