Cursed Gear Stimulants are a created enhancement in the Seraph of the End series. For cursed gear wielders they are practically used for people to increase the synchronization with their demons to improve the odds of survival against stronger threats.

In emergency situations, a commanding officer can order soldiers to ingest special supplements called "curse stimulant pills", which take 10 seconds to take effect. They raise a person's synchronization with their demon to 150% for 15 minutes before it then drops to 0%. In exchange for drastically increasing power, endurance is significantly reduced. Two tablets is as far up as 180% but risk killing the user by sending them into shock. Most often, only one pill is used and only during extremely dangerous battles. Taking three tablets ruptures all of the user's internal organs. When Yūichirō Hyakuya disobeys orders and ingests a third pill in chapter 33, he immediately begins coughing up blood. Blood pours out of his eyes, and curse marks spread over his visible skin.

The supplement only temporarily increases power and does not draw out the special abilities or any long-term strength of the Cursed Gear.

Different supplements can be given to different soldiers for different results. For example, Lieutenant Colonel Guren Ichinose can issue a special supplement to Special Private Yūichirō Hyakuya, one of the Seraph of the End, which will make him turn into a human-slaughtering, one-winged, extremely powerful monster. As a result, Yu loses his memories of everything since the beginning of his transformation until he wakes up after a coma a week later. That particular drug takes five days to leave his system. Even after recovering from a coma, he feels very tired.

"Oh, don't worry. The Demon Army itself one hundred percent guarantees that these supplements are positively riddled with harmful side effects."
—Shinoa to Yu in Shinjuku ("A Very Safe Supplement")

They have many harmful side-effects. The soldiers use a timer that goes off after 13 minutes, so they can get to safety before becoming defenseless.

The JIDA notes that there are numerous harmful side-effects on humans and that no one should use it. That is why most don’t want to take it if at all possible. 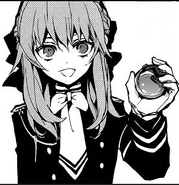 "These are a temporary measure. Getting the fullest out of your Cursed Gear requires copious study and training. The drugs are meant to make up for that which even the most devoted training can't provide. But look at the world around us. We simply don't have time for that. War has already begun."
—Shinoa to Yūichirō Hyakuya in Shinjuku ("A Very Safe Supplement")