Yūichi Nakamura (Japanese)
Dave Trosko (English)
Guren Ichinose (一瀬グレン, Ichinose Guren?) is the tritagonist in the Seraph of the End anime. He is a Lieutenant Colonel of the Japanese Imperial Demon Army and the leader of the Vampire Extermination Unit's Moon Demon Company. He is also the squad leader of the Guren Squad and works with them, and prepares Shinoa squad to defend Shinjuku from a vampire invasion. Guren is then tasked by Kureto to lead an operation, targeting vampire nobles in Nagoya. 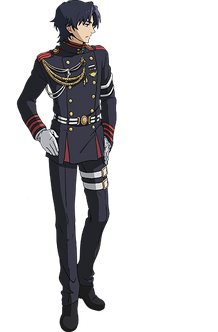 He is a tall, young man with small purple eyes. His medium length black hair is parted in the middle with the bangs hanging over his forehead. Whilst often slightly tousled Guren occasionally has his hair slicked back during the midst of skirmishes on the battlefield.

For clothing he wears the standard JIDA uniform, which consists of a long-sleeved, double-breasted black coat with two rows of gold buttons down the front, red details including shoulder epaulettes, gores at the bottom, and stripes on sleeves. Other decorations include gold aiguillettes and white fourragères worn on the right shoulder. This is attached to a stylized cherry blossom decoration pendant at the center of his collar, and two bars with unit insignia medal below them on the left.

He further wears a pair of white gloves, a black on white armband on his left arm, and a similarly striped black and white web belt with a frog for his sword on the left, and a gold waist-plate. In addition, he also wears the uniform trousers with two white belts strapped around his left leg and black shoes.

When a Namanari, Guren retains his violet colored iris yet they are circled by a bright red color.

Guren would become a wise leader who values teamwork, co-operation and friends, and determined those were necessary to ensure the survival of the human race from demons and vampires. When Yūichirō Hyakuya tried to join the Moon Demon Company, Guren refused until he made friends.

Whilst Kureto lists them as weaknesses, Guren is felt to possess love, friendship, and honour but never learns to set aside his emotions in order to lead. Guren felt it was barbaric that vampires were being starved in experiments to turn them into cursed gear. Yu describes Guren as someone who likes to talk and he gives good advice.

Sometimes pretending to be lazy, in truth, he really works hard. He keeps many secrets to himself, and has no difficulty lying about them. He also plans to dethrone the Hīragi Family. It is made clear when Guren is possessed, and his true desires come to light, that he, along with Shinya Hīragi, wants to change the status quo and hierarchy.

When enduring hardships in battle he will focus on winning and take the most direct path to that. Whether working as a squad and never intending to fight a foe one on one, to using a spell tag to keep Mika's sword in him to allow Yu to make the hit, Guren will persevere. This applies to when he is being beaten, he will joke and only speak with misinformation when being questioned.

Guren's personality changes drastically when he is overtaken by his demon blade, Mahiru-no-Yo. According to Ferid Bathory, it happens more often than shown, and his demon side is capable of hiding his true nature from his close friends. Yu only realized something was amiss when Guren was crying with his face at odds with the display. It only clicked for Shinya after a hint from Kureto and when he was confronting Guren on how their comrades were dead where Guren had a serene expression. Guren is described as being just a single step away from becoming a complete demon.

When Mahiru is in control of Guren's body, he becomes utterly ruthless in the pursuit of his goals and whilst in this state he will kill both vampires and his own human comrades for use as sacrificial pawns for the Seraph of the End experiment. This Guren was aware beforehand that the test would be taking place at Nagoya airport, and freely shared this information with a third progenitor vampire, Krul Tepes.

Although murderous to those he comes across, he enacts less extreme in comparison, but still heinous actions, to those he knows such as kicking Mika to stabbing Kimizuki and Yu. In this state he was familiar with who they were and in Yu's case he welcomed him after Guren perceived that he had gone crazy.

Whilst he can feel pain, he does not appear to have any survival instincts. He was unconcerned at approaching a seraph with a clear desire to murder all before him. Guren was apathetic to Shinya pointing a gun directly at his face and a similar detached attitude to reality is seen in his manner of speaking.

Capable of rational discourse, he remembers Mika from the battle of Shinjuku and told Shinya he was doing it for their childhood goals. Feeling that Yu was crazy when he was active as the King of Salt, Guren welcomed him to the club. Guren was happy to see that Narumi was alive and seemed under the impression that Narumi would hurry up and hand Yu over to him even after Guren had killed his comrades and did not see anything amiss with his request.

Unlike demons which are different creatures inside people, Guren is still somewhat himself as a Namanari yet exhibits a fundamental detachment with how to act in certain settings. The Namanari may as well be Guren who can murder freely and take such extreme measures to get what he wants, with added bizarre traits such as a compulsion for violence mixed with feeling peaceful where he is at ease around dangerous situations.

For the comprehensive account of Guren's experiences in the Seraph of the End anime view:

The possessed Guren is able to move at a remarkably rapid speed even though his monstrous movement was shortly anticipated and then countered by the third progenitor, Krul Tepes, leaving him pinned down on the ground in defeat.[2] The physical prowess bestowed by the demon weapon, Mahiru-no-Yo in this state proves so great that Guren could casually overwhelm Mika in terms of physical power, despite the large boost he acquired for becoming a true and complete vampire, as well as wielding a first-class vampire sword (though at the time he had not fortified himself by having it drink his blood). In addition to fending off Mika in their exchange, he also could lift him by one of his feet, and then hurl him into Yu to knock them both over. It was while Guren is also fighting him hand-to-hand in close combat to his own advantage for a very short period of time.

While slashing each and every one of them with his Mahiru-no-Yo sword, Guren can easily repel away the Tenjiryū decoys set up by Mitsuba's demon weapon ability at a quick succession. Unlike in the manga, where a sword fight between Guren against Yu and Kimizuki never occurs, it actually happens in the anime. Guren was able to effortlessly fend off both of them at once simultaneously, and then low-kicking Kimizuki away while handling Yu on his own with little effort even though he calmly praised him for his improvements.

Unlike the manga, Mahiru-no-Yo's appearance is portrayed differently in the anime. Mahiru-no-Yo's facial appearance is seen and they hand down the weapon back to Guren's possession. Guren would go on and further use the power of Mahiru-no-Yo to summon forth a red whirlwind cloaked with thin layer of crimson-like demonic aura. More so, the demonic aura can be seen concentrating all around its inner layer and then being destructively launched at targets through him up front within his range. This emission was able to demolish the concrete wall of a building, casting out the likes of Yu, Shinoa, and Mitsuba and leaving them at a standstill temporarily.

When Guren spoke of drinking the blood of human sacrifices, demons, and the progenitors, his katana drastically underwent a sudden change of color scheme. Through doing so, the katana itself went from being almost black in color to purely red throughout the blade's length. Furthermore, the transformation of his demon sword's color scheme is almost identical to that of a first-class vampire weapon, namely those used by the progenitors, when they allow it to drink their blood, giving the blade a deeper red shade. Guren managed to change a cursed gear weapon's color scheme from that of the Black Demon Series, into fully red without placing any sort of talisman on it.