26
"Interlude - Shinya, Mahiru, and Guren" (Interlude ～深夜と真昼、そしてグレン～, Interlude ～Shinya to Mahiru, soshite Guren～?) is the first bonus chapter of the Seraph of the End: Guren Ichinose: Catastrophe at Sixteen manga. It details Shinya Hīragi's past.

It is recalled how Shinya won a race and was selected to be transferred. Taken from his family, and not permitted to see them again, he joined a school system to become Mahiru's fiancé. Over years he took part in exams and in a system where he had to fight and kill other students, who were disposed of if they failed in areas as well.

Meeting Mahiru for the first time, Shinya heard she was in love with someone else. Rather than Shinya being disposed, Mahiru suggested she would pretend to be in love with him. Since Shinya had not lost before, Mahiru asked if he wanted to do so now, then attacked. Finding her slow, Shinya caught an illusion, where Mahiru behind him attached a spell tag to win.

Seeing how she felt about Guren and feeling jealousy, Shinya stuck with the arrangement but wanted to see what he was like. Outside of school, Shinya would see Guren for the first time.

Shinya remembers how he used to enjoy running events as a boy. Crossing the finish line, Shinya received a medal as he was congratulated for first place. A teacher observing told him he was truly a hard worker and an excellent student. Finally, they got a call from the house and that was good news as Shinya will be transferred to another school. When Shinya asks if his family will come along, the teacher replied no, only him.

Being driven along a freeway, Shinya asked the man beside him if it was true that he could not see them again. Answering yes, he says Shinya is not allowed to see his real parents anymore. Adding that it was an honour, the man states for Shinya to not let his emotions cloud his judgement. On the way to Shibuya, Tokyo, it was how Shinya's life as a candidate for the stallion of Mahiru Hiragi began.

Within a classroom with an exam underway, Shinya thinks how after that he did not have time to cry. The test was held every three months. A student was led away after exam results were posted and a member of the faculty called for everyone's attention. If they could not work their way up to 30% then they would be disposed of like that boy, then stating for them to do their best she questioned what their answer was. A student with Shinya spoke for them to do their best. In a once a year competition, this boy was against Shinya in a fight, and while he was sorry that he had to win or else he would be disposed, Shinya told him there was no need to apologize before stabbing him.

Having blood over his face with the match over, Shinya thinks how he stopped making friends. Stepping all over everyone and doing exams, murdering people everyday and glancing to empty seats beside him, and making use of spell tag based magic, it went on like this for years. One day Shinya was congratulated by someone and informed that finally he has been chosen to be Mahiru Hiragi's fiance. Asking if he did not have to compete anymore, it was the case, Shinya also heard that he was alive. The informer stated that Mahiru would be here soon since it seems she wants to find out more about Shinya. After declaring that they wished a wonderful meeting between the two important members who will hold the future of the Hiragi family, Shinya sat on the ground.

Registering that he survived, Shinya chuckled somewhat. Considering Mahiru, he wondered if his fiance was cute or gentle. Approaching him, Mahiru questioned if Shinya was the one who survived and is assigned to provide superior DNA for her future child. Answering yes, Shinya bowed and spoke how this is their first meeting. Asking what his name was, Mahiru heard it was Shinya, which is explained to mean "deep night" as in "midnight". After she remarks what an unusual name, Shinya comments he thinks it is the right name for someone who lives in the shade of the sunshine of Mahiru, who replies that is a very vulgar way of putting it.

Wondering if she does not like this approach, Shinya begs her pardon, he just found out that he survived so does not know how to deal with a person from the Hiragi family. Holding her hand out to silence him, Mahiru declares she already has a person she loves, therefore she cannot accept Shinya and has come here just to tell him this. Ascertaining whether this means he is going to be killed, Mahiru tells Shinya no, she will pretend to like and go out with him. From this, Shinya gauges that Mahiru's lover is someone the Hiragi family will not tolerate. After Mahiru judges him a smart guy, Shinya adds that is why she chose him as a cover.

Sharing how he was wondering what kind of person Mahiru would be when he heard she was the daughter of the Hiragi family, Shinya sees she is just a young lady in love. Confirming as much, Mahiru details how she was born into a family that does not allow a normal love, and she is indeed just a young lady in love. With Shinya commenting she calls herself a young lady, Mahiru joins in the laughter. Mahiru shares her wish that she was born a normal child, one who is allowed to fall in love with anyone, and Shinya speaks how he was not interested in making her take him into his heart earlier, but now is starting to want that a little. After all, he has never lost to anyone before, because if he did he would have been disposed.

Not minding being a cover for now, Shinya affirms that he is going to capture her heart and then they will become a true couple. That will be his next goal. Okay with that, Mahiru asks whether he would like to lose for once, right here. Lunging at him, Shinya contemplates how she is so slow, and so much for the Hiragi.

Bored in his expression, Shinya effortlessly grabs Mahiru's arm, where that and her fade into nothing. Behind Shinya, Mahiru questions is that all they gave him. With Mahiru remarking what a let down, he cannot even touch her, a spell tag has been placed on Shinya's back which she speaks to explode. On his knees, Shinya considers how he manage to counteract the spell and minimize the damage as it smokes on his back. As Mahiru stands, Shinya guesses it is his first loss. Questioning if it is that, Mahiru asks from now on to please become stronger.

Recalling a conversation when Shinya was taken, with 300 million Yen and a possible raise in rank in the Order of the Imperial Demons discussed, Shinya feels he had already lost a long time ago. Stating he is here because he is not a free man, Shinya thinks how Mahiru came here to not lose. Regarding the person Mahiru loves, Shinya questions if he is stronger than her. Finding her cute as she mentions Guren's name, Mahiru does not know whether he is strong or weak, she will not change her heart. Finding it unfair, Shinya raises that he has been knocked out of this competition from the start.

When Mahiru thinks that Guren is probably strong, far stronger than her, Shinya asks if she likes this Guren boy that much. Getting it, Shinya will disguise himself as Mahiru's lover. Until she can be with the person she loves, he will temporarily take his place. Satisfied with that, Mahiru says for Shinya to please take care of her from now on. Suggesting she just call him by his name, Shinya details it would be less suspicious this way, and says for Mahiru to please take care of him too before they take one another's hand.

Thinking how Mahiru's face looks so happy, Shinya wonders just who is this Guren boy. For the first time, he felt a twinge of jealousy, even though he had never seen him. Later at school, Shinya hears other students mention how the garbage from the Ichinose is coming. Glancing over to wonder if that is him, Shinya sees Guren interact with Sayuri Hanayori and Shigure Yukimi, before awaiting him to approach.

The teacher who told Shinya he was transferring schools 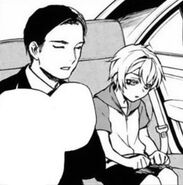 The man who brought Shinya to his new life 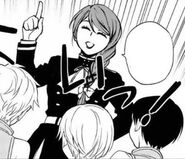 A boy who was friendly, and sorry, but did not want to be disposed

The man who informed Shinya he was not Hiragi, and would meet Mahiru