1. Kill the vampires and regain control of Japan.

The Japanese Imperial Demon Army (日本帝鬼軍, Nihon Teiki Gun?, abbreviated as JIDA) is a military group under the Order of the Imperial Demons. They deal with supernatural tasks in Japan and are comprised of many elite units. It was lead by General Tenri Hīragi before he was killed by his son, Lieutenant General Kureto Hīragi, who becomes its new leader soon after. After the apocalypse, the JIDA comes into great power and establishes human cities in Shibuya and Shinjuku where they wage war against the vampires.

Their weapons include mass-produced Enchanted Gear, Cursed Gear, drugging up, spellcraft, and the Seraph of the End.

The Japanese Imperial Demon Army was formed in response to the decline of the human population and the threats of both demons and vampires. Though there are also other magical organizations around the world, it is the JIDA that stands out as the most effective human organization that can survive and fend off vampires and demons.

After the outbreak of the Apocalypse Virus, the human population fell by 90%. It killed off anyone 13 or older, who did not receive the vaccine. Strange monsters referred to as the Four Horsemen of John appeared and began killing off the remaining humans. In response, vampires came into the open and gathered as many humans as they could as human livestock out of concern for their drastically diminished food supply.

Mankind would not give up so easily and rebirth was coming, and that rebirth would be the Japanese Imperial Demon Army. Their goal is to rally together all human survivors and snatch back supremacy from vampires.

The high ranking JIDA officials make up the governing body of the Army. They control three human cities: Shibuya, Shinjuku, and Ikebukuro.

The members of the Hīragi family has always been occupied the top positions in the government. The Headquarters of this government is in Shibuya where all high ranking military officials discuss about protecting the human territories, and conquering new areas from the vampires. It seems that Guren is secretively planning something to change the Government style.

Though Shibuya and Shinjuku are in complete control of the JIDA government, the Ikebukoro area is a bit defenseless comparatively. As a result sometimes vampires sneaked into the city. Yūichirō and Shinoa were sent in a mission to exterminate vampires that may have infiltrated a high school in Ikebukoro.[1]

To increase their numbers, the JIDA encourage all soldiers and citizens to procreate and fight for hegemony; however, they have strict population regulations and may not allow humans from the outside world enter their gates. This contradictory attitude suggests that their goal in promoting procreation among their soldiers may actually be to give them something to fight for.

They also experiment on their human population as the entire Second Shibuya High School they run is actually an experiment for demon resistance, which either turns its subjects into feasible soldiers or else makes them go mad. It is not unusual for their test subjects to die or be killed by these testing circumstances.[2]

The standard JIDA uniform consists of a long-sleeved double-breasted black coat with two rows of gold buttons on the front and light green details including the shoulder epaulettes. Some JIDA members wear either one or two Sam Browne belts which pass diagonally over either shoulder. All members of the JIDA wear a pair of white parade gloves (with the exception of Mitsuba Sangū who wears black ones in the manga, and Rika Inoue who does not wear gloves) and white web belts with a gold waist-plate. All male members wear the standard uniform trousers. Most female members wear the standard uniform skirt, though some choose to forgo the skirt in favor of the uniform trousers. Most members wear a pair of black boots that go over the leggings or socks though some wear black shoes instead. There are variations of the uniform that include things such as tailcoats, fourragères, and armbands.

Some members wear a black cape with the same light green details and lining as the jackets. Some also wear a kepi-style cap with light green and gold details as well.

The upper ranks (typically worn by the Hīragi and their branch family members) wear a similar uniform but with red and gold details instead the usual light green and gold. These uniforms also seem to include aiguillettes and various decorations such as crescent moons or stylized cherry blossom pendants. The lead general, Tenri Hīragi, wore a unique variation of the uniform that included a maroon military overcoat with shoulder epaulettes which had a gold bullion fringe along with an aiguillette on his left shoulder.

Tenri Hīragi (deceased)
Add a photo to this gallery 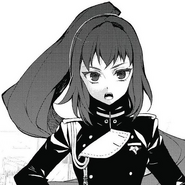 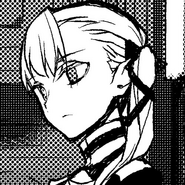 Aoi Sangū
Add a photo to this gallery

Guren Ichinose
Add a photo to this gallery 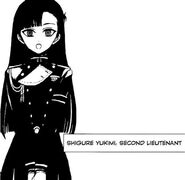 Sayuri Hanayori
Add a photo to this gallery

Mitsuba Sangū (defected)
Add a photo to this gallery 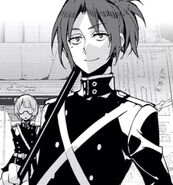 Aiko Aihara (Deceased)
Add a photo to this gallery

Engaging a Horsemen of the Apocalypse

Add a photo to this gallery

Retrieved from "https://owarinoseraph.fandom.com/wiki/Japanese_Imperial_Demon_Army?oldid=76627"
Community content is available under CC-BY-SA unless otherwise noted.