Kiseki-o (鬼箱王, Kiseki-Ō?, lit. "King of the Demon Box") is a high-ranked possession-type demon of the Black Demon Series. He formed a contract with Shihō Kimizuki and became his Cursed Gear. 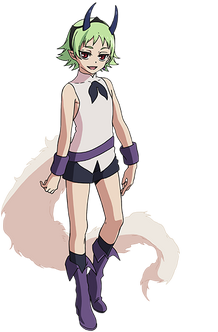 Kiseki-o appears as an androgynous preteen. He has short light green hair with short bangs and short eyebrows. He has red eyes, pointed ears, fangs, black horns as long as his forearm (only after he drinks Kimizuki's blood), and a fluffy white tail as long as he is tall. He wears a black headband behind his horns and a dangling earring with a sapphire orb on his right ear.

He is dressed in a white sleeveless collared shirt with a black knot with a brown belt and short black shorts. He wears black cuffs on his forearms, matching socks that reach up to a few inches below his knees, and black boots with heels that he leaves unzipped halfway.

He often takes the image of Kimizuki's younger sister, Mirai, while battling him for control.

As a possession-type demon, Kiseki-o is particularly proud and nasty, and he is utterly unwilling to surrender to the weak. He uses the memories of Kimizuki's sister against him to break his will.

Kiseki-o is a demon who was sealed within Cursed Gear in the form of twin swords connected by chains.

Although Kiseki-o does not actually appear, he takes the form of Mirai and uses an environment of Kimizuki interacting with his sister from the past. He begins with speaking pleasantly, replying as Mirai that she is not too bad and thinks it is going to be a good day for them, before asking why her brother does not leave Mirai to fend for herself so he can move on with his life. Saying if things do not change Kimizuki will end up dead too, as Mirai she answers that Kimuzuki does not really mean that he intends to have them both survive. At that point Kiseki-o drops the pretence of acting like a sweet girl, yet still as Mirai he darkly speaks that Kimizuki wishes Mirai would just die already. Rising from bed, Kiseki-o states that despite how noble Kimizuki tries to be, deep down he is a selfish human who only thinks of himself. Kiseki-o confirms that he is the demon, and questions whether he was right about Kimizuki's thoughts. He has seen every shameful thing that has floated through his little brain and wonders what his sister would say if she knew the truth.[1] Aware of it, he matches Mirai's concern that Kimizuki forges a contract with him in chapter 6 and does so faster than Yūichirō and Asuramaru.

In chapter 21, Kimizuki advances his training with Kiseki-o, and they battle for over 30 hours. Shihō screams and shakes as they fight within his mind. Shinoa warns her squad to be prepared to eliminate Kimizuki if he loses control.

In Kimizuki's mind, he struggles against Kiseki-o, who taunts and then stabs him, catching Kimizuki's blood in his mouth. He insists that Kimizuki's body is already his and bites him, commanding him to break and sending him into his illusion. Kimizuki relives his past of four years ago when he was eleven years old. Mirai says to leave her behind, and Kimizuki realizes this is an illusion once again. Kiseki-o corrects him, saying that these are his true memories and insisting that he wanted to abandon his sister.

Three other kids around Kimizuki's age come to his apartment door and say it's time to move. They try to convince him to kill Mirai, who is an invalid and is always holding them back. They say she told him she wanted this. When he refuses to, they say they will do it for him. He breaks free and locks them outside of the apartment. Mirai insists on Kimizuki killing her, and Kimizuki keeps telling her to shut up. The demon reveals his deepest desires, insisting he resents taking care of Mirai and wondering why this all happened to him.

Kimizuki approaches Mirai and begins chatting about Yu. He says Yu wants to rescue his family no matter what, even though they aren't blood related. Kimizuki says that if the only solution is to kill his sister, then he will choose death. He insists he will never do what the demon says and stabs himself to break free.

Recovered from the psychic wounds, he charges at Kiseki-o and cuts him. Kiseki-o says there is still darkness in Kimizuki enough to betray his friends if it meant saving his sister. Kimizuki insists there is no one without darkness in this world, and Kiseki-o smiles. He says he likes humans and Kimizuki and decides to lend Kimizuki his power.

A special private in the JIDA, under the Moon Demon Company, whom Kiseki-o forms a contract with. He describes Shiho as ugly, young, and naive, but he claims to like him. Their battle for control can be violent with Kimizuki asserting his control through sheer power. He often creates illusions with Shiho's sister Mirai in order to break Shiho's will.

Kiseki-o used his ability to restrain Yu from being overtaken by his demon. Using the Devil's coffin ability was sufficient in achieving this purpose, causing Yu to fall unconscious and nullify Asuramaru's influence.

Shiho Kimizuki's ill younger sister. She was infected by the Apocalypse Virus even though she was younger than 13, and Kimizuki has taken care of her since then. This has been very stressful for Shiho, and she even wanted Shiho to kill her back then. She is currently under JIDA's care. Kiseki-o is fully aware of and exploits their connection, often taking her form to torment Shiho. He wondered what Mirai would say if she knew the truth of Kimizuki's thoughts.

"This is the end, Human. Relive your past. See your inner darkness. Look at your deepest, ugliest desires. Let 'Shihō Kimizuki' break."
—Kiseki-o to Kimizuki. ("Kiseki-o's Box")

"There, see? For a moment, you wished you could end it all. You were sick of it. You wondered why all this had to happen to you. You were only a child, after all. It was hard. You were scared. You wanted someone to save you. You wanted to run away from it all, forever. If only you had actually killed your sister... If only you had rid yourself of that burden... Wouldn't it have been better? Yes... That's exactly what you thought, isn't it? It is over, Shihō Kimizuki. You failed at life that day, when you made the decision you did. There's no need to be stubborn. Take the easy path. It's simple. Just take that knife and do what you should have done then. Come on. Put your sister out of her misery."
—Kiseki-o to Kimizuki. ("Kiseki-o's Box")

"...Ah well. There is no rush. After all, there is still darkness inside of you. Darkness so deep you wouldn't hesitate to betray your friends if it meant saving your sister."
—Kiseki-o to Kimizuki. ("Kiseki-o's Box")

"Yes... That's right. That's why I like humans. And I like you too. I guess I could lend you my power. You are ugly, young and naïve... but you may call upon me to possess you."
—Kiseki-o to Kimizuki. ("Kiseki-o's Box")

Retrieved from "https://owarinoseraph.fandom.com/wiki/Kiseki-o?oldid=106314"
Community content is available under CC-BY-SA unless otherwise noted.