Lacus Welt (ラクス・ウェルト, Rakusu Ueruto?) is a vampire in Japan who often works with Mikaela Hyakuya and René Simm as a city guard. 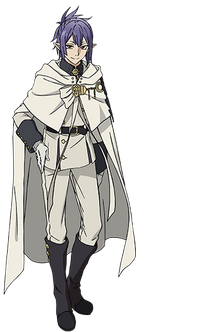 He has long purple hair pulled to the back of his head with clips. He has bangs. He has long lower eyelashes. Like all true vampires, Lacus has red eyes, fangs, and pointed ears.

He wears the traditional uniform for vampire soldiers. He has knee-high boots and wears the white cape with the hood down. He has a dark band around either thigh.

In chapter 23, he wears the newer, more form-fitting uniform. He wears a belt with knee-high boots and a hoodless cape that reaches his thighs.

Like all vampires, he sees humans as mere livestock and even laughed at the humans who thought that the vampires came to protect them. He says vampires do not protect livestock but rather own them.

He appears to be obedient when given his orders.

Sociable by nature, Lacus tries repeatedly to get Mika to open up or speak. He is concerned about Mika refusing to drink blood directly from humans when he can, although he is not aware that Mika has yet to ever drink any human blood at all. He appears to care about Mika in spite of Mika's constant rejections toward any kind of friendship. However, he later states to Aiko Aihara that he does not care if Mika dies.

He is always with René Simm.

Not thinking about anything too deeply, he simply faithfully follows his desires. He has difficulty restraining his thirst and tends to drink so much blood that the human dies. This has been shown at least twice so far.

Currently his past is unknown. What is known about Lacus is that in his human life he had siblings, and in 2012, he killed Yoichi Saotome's sister, Tomoe Saotome, when he drank too much of her blood. René then informed him him they are being called to HQ, and Lacus leaves.[2]

Along with the other city guards Mikaela Hyakuya and René Simm, Lacus arrives in Sannomiya, Kobe to claim the territory for the vampires. After Mika slaughters a Horseman attacking a human girl in one swing, the humans cheer that they will now be protected and helped by the vampires just like the humans in Osaka and Lacus comments that they are idiotic creatures. Lacus laughs at them, stating that they do not protect livestock and merely keeping them fresh since they own them.

Attempting to strike up a conversation with Mika, he comments that Mika has only been a vampire for four years but has such amazing power. He says there is a rumor Mika was turned by her majesty, Third Progenitor Krul Tepes herself and asks if it is true. Listening as René says Mika stole the kill and hearing Mika say he does not care about the glory and that the others may claim the credit, Lacus and René shrug and proceed to inform the new livestock of their rules. René informs those gathered that from now on this district will be governed by the vampires, they can guarantee their safety. In exchange, all they are is that people donate blood so that they can continue to keep them safe.[3]

When Yoichi is making a contract with his demon, Lacus is seen as Gekkouin uses this memory to erode Yoichi and possess him. Physically, Lacus is onboard an aircraft nearing Tokyo where an announcement reports they expect attacks from the Japanese Imperial Demon Army near Ikebukuro, Shinjuku and Shibuya then asks Mika if he heard that.[4]

He, René, and Mika follow Seventh Progenitor Ferid Bathory's orders when the attack Shinjuku. Ferid orders Lacus and René to take charge of the human soldiers while he and Mika fight the enemy leader, Lieutenant Colonel Guren Ichinose.

After they return to Sanguinem from the battlefield, he, René, and Mika all receive curse detoxification. Mika had the worst injuries, and Lacus asks him how he is doing. Lacus continues trying to talk to Mika, bringing up his ignoring his elders, the monster on the battlefield, the Progenitor Council, the "seraph of the end," their unknown objective, Ferid, Mika knowing that monster, Lady Krul favoring Mika, and what exactly Mika is. Mika only answers with silence until responding to Lacus's final question by saying he is just an ugly bloodsucker, which baffles Lacus. Krul Tepes summons Mika to the Royal Audience Chamber, and Lacus calls him a queen's pet.

Lacus and Rene are approached by Mika in Kyoto. All of them are wearing their new uniforms. They have the order to deploy to Nagoya.

Lacus, along with Rene and Mika are sent on an assignment to collect humans from the surface and deliver them to Nagoya. Lacus chases down a human girl, claiming they do not kill livestock, but he drinks her dry and drops her corpse a moment later. Mika calls him out on it, but he says that drinking feels so good that he always forgets to stop before the human dies. He asks Mika if he is going to drink any blood which Mika says he is not. He sees that Mika is in pain from his thirst and tries to convince him to drink some. He warns Mika that they might not be free to drink when they reach Nagoya. Mika claims he is not interested in human blood, which Lacus sees as unlikely.

Mika drinks blood from a vial before dropping it and attacking a human child. Mika stops before biting her and lets her go. He says he does not need any blood. The choppers take off with the livestock since they met their quota, and Lacus, René, and Mika head to Nagoya on foot. They enter a helicopter at some point off-scene.

As soon as they arrive, Aiko Aihara destroys the nearest helicopter when it arrives, and the three vampires jump down. Mika attacks her while the other two take on the rest of the human cavalry. The humans commit suicide by swallowing poison. When the three decide to head to Nagoya City Hall, Aiko jumps back to life and attempts to hold Mika hostage. René orders him to capture her, and he crushes her wrist, much to Lacus's amusement. She begs for her life and reveals that the JIDA sent an army of fifty to attack the Automobile Museum and assassinate Seventeenth Progenitor Zane Lindau.

They begin to head off, but the human jumps back to life and attempts to kill Mika once again. Mika kills her in retaliation, and they are unable to ask her further questions. Mika claims he cannot trust the word of a human who killed herself and takes five lesser soldiers to investigate Nagoya City Hall while Lacus and René go to the Automobile Museum with the other soldiers.

Three months after the battle at Nagoya airport, Ferid makes a summons to the Progenitor Council. Suddenly from outside, the humans invade Sanguinem. Lacus and René runs in on the meeting, saying the humans are coming to the palace and that he (Ferid) must flee.

Lacus and René are in new attire when they see Mika at Osaka Bay with the other vampires gathered there. Lacus tells Mika that the vampires are going to be retaking Sanguinem, and expresses his disbelief that the vampire capital ended up falling. He is unaware of a now teenage Yoichi watching him from a far, and is plotting his revenge on Lacus for killing his sister. Later on, Lacus comments on Krul's predicament when she and Ferid are subjected to sunlit torture.

In Chapter 68, he appeared briefly with René as the Horsemen of Apocalypse disappears.

Being a vampire, he is naturally stronger than a human and has the ability to regenerate from non-curse wounds. He can also gain strength by drinking human blood.

Despite not being a noble, Lacus is known to have a high combat ability.

While he has not used it yet, he wields a halberd (First Class Weapon).

In the anime, Lacus also wields a sword that does not require blood from the user for strength, as its shown to create a blast of wind that easily pushed back Mito Jujo from a single slash.