Lest Karr (レスト・カー, Resuto Kaa?) is a third progenitor of the vampires who resides in Germany, Europe. He is one of the high ranking vampires to be a part of the Progenitor Council. 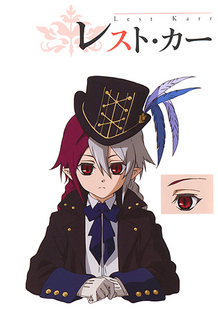 Lest Karr has a short stature and an appearance of a young male with dark-rimmed eyes. His hair is styled into two braids that trail down his back. The right half of his hair is black while the left half is white. He has bangs that cover part of his face. Just like most true vampires, he has fangs, red eyes, and pointed ears.

Lest has an intelligent nature in which his capacity for analysis contrasts his child-like appearance. These two traits and others he posseses make him seem like a good fit for his current rank. His arrogance is shown by the fact that he is quite against his fellow third progenitor, Krul Tepes's, decision-making as the Queen of Japan; even going so far to state that he himself would be perfectly capable of ruling the country.

Though despite his disagreements with Krul, it seems he is actually most likely capable of holding all of Europe, as we've not heard of any conflict from that side.

He does seem to show a rather childish side when he questions Geales about his activities and how he rules Russia.; however, he can also display his serious and superior attitude when the situation calls for it, as shown when Gabel Parthe continuously goads at Ferid for being a mere seventh progenitor when Lest tells him to be silent.

He appears to be two centuries younger than Krul. Like the other vampires in the Progenitor Council, Lest was also sired by the First Progenitor, Sika Madu. He leads the vampires in taking over Europe in the aftermath of the Apocalypse, and destroyed a league of spellcasters experimenting on the seraph in Europe.

Third Progenitor Lest Karr appears in the Progenitor Council meeting and listens to Seventh Progenitor Ferid Bathory's report about the battle at Shinjuku. Upon learning that the humans have gained power in Japan, he accuses Krul of mishandling her management of Japan, and says he would be happy to take her place. When she calls him a child and orders him to be silent, which he states that he is only 200 years younger than her and is more powerful anyway. After Ferid interrupts their argument, Krul insists she never fails.

When asked about the younger vampire standing behind Ferid, the silver-haired noble answers that he is his most favorite servant, whom he cannot bear to part from. One progenitor scolds Ferid for such rule-breaking, and another comments that the Seventh Progenitor has always been eccentric.

Lest appears once more by Urd Geales' side as the second progenitor watches a theatrical performance put on by humans. He engages Urd in a conversation about his activity. The second progenitor asks Lest why he is in Russia, stating that his territory is in Germany and for him to return. The third progenitor amusingly replies back that he has nothing to do in Germany since his ruling is firm. Urd then proceeds to add in about Japan being the opposite under Krul's reign, in which Lest questions why the other hasn't heard of the news yet.

Before Lest can inform Urd about the events unfolding in Japan, a vampire bursts into the room. He informs Urd of the humans in Japan once more experimenting on the Seraph of the End. Hearing about the experiment, he asks what Krul was doing. Lest comments that Krul has many responsibilities, adding in that had he been there before Urd abruptly silences him. The vampire then informs Urd that from Japan the Progenitor Council has opened for meeting, in which both second and third progenitor attends. Lest wonders if this is Krul trying to give an excuse.

Both progenitors heads towards Saint Basil's Cathedral; children is seen running around freely while wearing normal clothing unlike that of those uniformed in Japan. Lest notices this and comments that the humans are pleased and that the culture fits. He compliments Urd on being the example of vampires by creating villages like these. The latter asks if the former is being sarcastic, in which he replies that he is simply being honest.

Inside the Saint Basil's Cathedral, Urd calls for them to contact Kyoto Sanguinem with the other progenitors present on-screen. As the live feed loads for Kyoto, they are shocked by the sight of Krul, beaten and bounded to her throne in an uncivilized manner.

Shortly afterwards, Ferid appears on the live feed in a joyful, playful manner. Urd calls out his name to acknowledge his presence.

The seventh progenitor apologizes to Urd and the other higher progenitors about the urgent call. Another high progenitor, Gabel Parthe, is infuriated with Ferid, a non high-ranked progenitor, having called them. Ferid repeats that it was an emergency that he called. As Gabel starts to goad at Ferid, Lest silences him. He states that with Krul dethroned, Ferid is the next highest ranking vampire in Japan. With Lest's urge, Ferid proceeds to inform the rest of the progenitors of the events that occurred in Japan. Crowley, Chess, and Horn speak up, only commenting little, irrelevant things. Urd is irritated with such a display and orders for them to stop acting foolish and to state the important details.[4]

Ferid then ultimately reveals to all in the Progenitor Council of Krul's betrayal of being involved with the humans' experimentation on the Seraph of the End. There are rears of shock and disbelief at the news.

Ferid continues to state that the experiment has been completed and the Seraph has been weaponized by the humans, and with both him and Crowley's efforts they managed to subdue Krul as a traitor while risking their lives. He informs the other Progenitors that the vampires are now weak and powerless against the power the humans possesses.

Suddenly from outside, the humans invade Sanguinem and on-screen, they blow the wall in behind Ferid. Lacus and René runs in on the meeting, saying the humans are coming to the palace and that he must flee. The seventh progenitor asks the higher progenitors for permission to flee Japan, and in return he shall send them Krul. Urd murmurs the country's name as a last word.

Sometime later, Lest Karr arrives in Tokyo Bay on a cruise liner and mentions punishing the humans and Krul Tepes.

Alongside with Urd's arrival in a later scene, Lest jumps off the side of another cruise liner to land by the Second Progenitor's side. He then comments that they've finally arrived in Japan, then questions the taller vampire if they should seek out for Kyoto and reclaim it from the humans. Shortly following, Urd says to himself about someone possibly also being in Japan, in which Lest responds with a curious tone.Following their arrival, when Ferid Bathory and Crowley Eusford shows up at Osaka Bay with the Shinoa Squad with Makoto in tow, Lest is there alongside with Urd and a considerable number of other nobles awaiting for their arrival.[5]

When Ferid greets the foreign vampires, Lest rips Ferid's heart out, shocking the humans present. Crowley warns the humans not to move and says this is just a game Lest plays. Lest interrogates Ferid, but Ferid's skin darkens as he begins turning into a demon. Under Urd's command, Lest returns Ferid's heart.

Urd says he smelled blood, but the scent suddenly vanished. He tells Lest to come with him and suddenly bolts to Ferid's mansion. Once there, they encounter Saitō. Urd fights him. When Lest stands in Saitō's way, Saitō cuts him in half and escapes.

Lest pulls his torso together and apologizes, but Urd tells him not to blame himself. Lest asks Krul to tell them what happened.

The noble vampires return from their excursion. Urd carries Krul by the back of her neck, and Lest drags Ferid by his hair.

Ferid insists he has not betrayed anyone and has not seen his father for a thousand years. When he starts to beg Urd as well, Urd orders Lest to silence him. Lest punches him in the gut.

Urd sentences Krul and Ferid to ten days of torture through sunlight exposure; afterward, they must explain their actions well or be sentenced to eternal torment.[6]

Much later in Kyoto, Lest along with Urd Geales and Ky Luc senses the presence of the First Progenitor and Urd says they will be going to Tokyo.

As a vampire, Lest is naturally far stronger and powerful than a human. This means that he also has immortality, immense strength, eternal youth and rapid regeneration. Being a third progenitor, he is one of the most powerful vampires worldwide over lower ranking vampire, and claims to be stronger than Krul.

As a noble vampire, he has the ability and permission to turn humans into vampires as he pleases.

It's been stated he wields a first class weapon that has yet to be revealed.

Retrieved from "https://owarinoseraph.fandom.com/wiki/Lest_Karr?oldid=79612"
Community content is available under CC-BY-SA unless otherwise noted.