Owari no Seraph Wiki
Register
Don't have an account?
Sign In
Advertisement
in: Vampires, Seraph of the End Anime Characters, Male Characters,
and 6 more

Kenshō Ono (Japanese)
Haruka Chisuga (Japanese, 8 years old)
Justin Briner (English)
Mikaela Hyakuya (百夜 ミカエラ, Hyakuya Mikaera?) is the deuteragonist of Seraph of the End. Taken with Yūichirō Hyakuya and other members of his orphanage family to an underground vampire city, he would plan to escape since Yu did not like it there. At the exit Mika would witness his family murdered by the vampire, Ferid Bathory. Mika survived by being turned into a vampire by Krul Tepes against his will.

Four years later he lives for news of Yu and finding him again. Coming across him at the vampire invasion of Shinjuku he would have what the vampires told him confirmed that Yu had been experimented on and was being used by the humans. Unable to retrieve him, Mika was tasked by Krul to go undercover where if caught he would be traitor to both humans and vampires.

Mika would seek out Yu at Nagoya and fight through the Moon Demon Company to rescue him. Pained by blood loss, he would become a complete vampire by drinking Yu's blood and recover from his injuries. He assists Yu and his squad escape both the vampires and Japanese Imperial Demon Army who had completed their seraph of the end experiments. 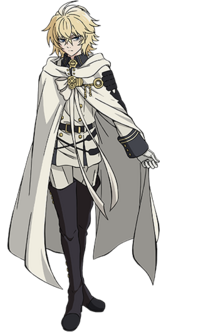 As an eight-year-old human child prior to the Apocalypse, Mika appears wearing short jean shorts and a white hoodie over a collared shirt. Sometimes, he is also shown wearing an over-sized jean jacket. He has short, wavy blond hair and blue eyes, which gives him the appearance of a foreigner in Japan. He is considered to be very handsome and has muscular built as a vampire at the age of 16.

As a twelve-year-old human living as a livestock, Mika wears the standard livestock uniform that consists of the Capri shorts, hooded shirt, and collar and shoes. (Unlike the manga) livestock wear shoes in the anime.[2] As a vampire, Mika's boots have less decoration and appear completely black.[3]

After becoming an incomplete vampire, he grows fangs yet his eyes remain blue. These turn red after drinking a human's blood, Yu's at which point he becomes a complete vampire. When he is sixteen, his hair reaches down to his shoulders.

For clothing Mika begins wearing the standard uniform of the vampire soldiers. It consists of a black collared shirt with cuffs and white trim. He keeps it buttoned over his neck and held in place with the vampire insignia. Over the black shirt, he wears the white military jacket with black trim and decorated buttons. It also has the black piece of the vampires on the left shoulder and black cuffs with white buttons that nearly reach up to his elbows. He wears white gloves and has a thick black belt encircling his waist, and he wears two smaller belts below it forming an X over his posterior and front.

He also keeps his sword at his left hip. He wears white pants with black boots reaching up to his upper thighs. Mika often wears the standard vampire white cloak with a hood as well. The gold decoration on it has blue gems hanging from its chains.

As a child, he was selfless, friendly, and outgoing. Mika approached Yu to welcome him to orphanage and reacted to Yu's anger with empathy. His family were important to him, not even minding living in a vampire city since they were together. Mika would take practical measures to provide food for them by offering his own blood to a vampire. He explained to Yu that they need to use their heads if they are going to survive. Mika's altruistic nature and concern for his family were what motivated him to steal both a map and gun before he led them to escape from the city since Yu did not like it there. After it became clear that the scenario was not going to happen, Mika reminded Yu they were family and ran towards Ferid with the gun to give Yu a chance to escape. He was happy that Yu acknowledged they were family and managed to escape.

He was against being turned into a vampire, yet not having a choice and living with the trauma of what happened to his family. His vampirism is a concern, and he appeared troubled when Yu was proceeding with the topic on whether he was human. Mika is resilient, physically as well, as when he shows little signs of pain after being stabbed through the body

Both when he was a human child and then a vampire later, Mika uses the term of leaving “this world” behind. In addition, he retains the desire to leave places that are dangerous to Yu behind in favour of living peacefully far from threats. Whilst, he was happy to adapt to living in the vampire city, and could survive as a vampire in a hostile world, helping Yu came first.

His seriousness, or bravery, stops him being afraid of extremely dangerous scenarios. Mika was not concerned with lethal spell tag attacks on himself, neither many armed soldiers. Weakened and defenseless, Mika also displayed no fear to a Four Horseman of John that was prepared to bite into him.

After becoming a complete vampire, he expressed happiness.

Mika was present when Yu was introduced by the director of the Hyakuya Orphanage as their newest family. Bringing Ako and another orphan with him, he greeted Yu, and said as an orphan too he knows how he feels. Mika was sad at first, but now he has a big family and if Yu would like then he can be a part of it. Hearing about Yu’s troubled experiences with his family, Mika empathetically understands it must have been really hard and offers his hand as starting today everything is going to get better.

Being a vampire, and one being turned by the third progenitor, Krul Tepes, Mika is afforded with supernaturally powerful strength and speed. He is able to avoid the detonation from a spell tag and partake in incredibly fast battling styles. Mika is agile and can leap to great heights. His regenerative capabilities allow him to heal wounds that would result in death for a regular person.

Where stronger vampire swords tend to have spikes that stab through the palm, Mika's weapon has thorny red vines that emerge from the lower two holes in the golden colored pommel to wrap around his hand. The silver blade is soaked red, as it draws upon blood to bolster Mika's capabilities to even greater heights. Even when not powered, the sword can emit destructive ranged attacks against multiple targets.