The Secret Military Exercise (特務演習, Tokumu Enshuu?), otherwise known as the PvP feature of Bloody Blades, is a weekly event where where players will get the chance to battle against other players (controlled by AI) in the form of a 5 vs 5 match. The PvP feature is divided into three leagues -- getting a high ranking will bring players to a higher league where they would be able to earn more rewards, while failure to maintain their positions will send players back to a lower league, where they will get lower ranking rewards as compared to higher leagues. 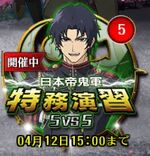 The PvP Lobby can be accessed through the main page. Rankings will reset every Tuesday at 15:00 PM.

Players will have to assemble a team consisting of 5 members, separated from their parties used in quest maps.

A score screen will show after finishing a battle. Losing would deduct point, while winning would add point.

Retrieved from "https://owarinoseraph.fandom.com/wiki/PVP?oldid=88996"
Community content is available under CC-BY-SA unless otherwise noted.