Owari no Seraph Wiki
Register
Don't have an account?
Sign In
Advertisement
in: Seraph of the End Anime Characters

René Simm (レーネ・シム , Rēne Shimu?) is a vampire who often works with Lacus Welt and Mikaela Hyakuya as a city guard. He is tasked with gathering surviving humans to provide a food source for vampires.

He was also entrusted to participate in the invasion of Shinjuku and capture Moon Demon Company forces. Travelling to Nagoya he came across the remains of vampires in a large scale army operations to assassinate vampire nobles across the city. René acted on information to assist the targeted nobles. 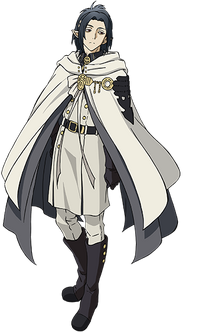 He has neck-length black hair pulled and worn over the back of his head with the sides appearing shaved with a weaved design. René also has long bangs that are parted on either side of his face. He has drooping eyes and bags under his vampiric red eyes. His additional vampire features are fangs, and pointed ears.

For clothing he wears the traditional white based uniform for vampire soldiers. René wears the white cape with the hood down and this is over a longer gray fabric underneath. The tunic reaches near his knees and is held by a black belt. He has knee-high black boots.

Thinking objectively in situations, René keeps a clear head in precarious situations. He does not approve of Mika's behavior in battle and thought he destroyed a Four Horseman of John by himself to gain glory. Unlike Lacus though, René is unconcerned about Mika's odd behavior as long as he does his job properly.

Obedient when given orders, he fulfilled what Ferid asked of him during the battle of Shinjuku and after reliably capturing some of the Moon Demon Company's strongest members, he gave them choices as livestock or death. He thinks to investigate a matter concerning a vampire noble otherwise they would be punished.

After the world was devastated by the Apocalypse virus, 90% of the world's population perished. René came across Lacus drinking Tomoe Saotome's blood and told him that headquarters is checking in and they want an update. He left with Lacus leaving Tomoe dead and her younger brother Yoichi under the bed hidden.

René Simm is within a city where the defenceless human population are under attack from a Four Horseman of John. As Lacus Welt is questioning whether Mikaela Hyakuya was turned into a vampire by drinking the blood of the third progenitor, Krul Tepes, René addresses the matter of the slain Horseman. Disregarding Mika's background René says he took the monster down before they could land any blows ourselves. He insults Mika and is under the impression that Mika probably wants credit for the kill. He looks to Lacus when he is told by Mika he can have the body if he wants it. Standing before the rescued humans before him René announces that from now on this district will be governed by the vampires. They can guarantee the human's safety. In exchange for their protection all they ask is that blood is donated so they may continue to keep them safe from harm.[2]

Onboard a plane, an announcement updates René and the vampires he is with that they will be arriving in Tokyo shortly. In context, that the vampires from the Kansai region are planning to reclaim the city of Shinjuku is known by Lieutenant Colonel Guren Ichinose of the Moon Demon Company. Attacks from the Japanese Imperial Demon Army are expected near Ikebukuro, Shinjuku and Shibuya. The plane is heading to Shinjuku first.[3]

A siege on the city is underway and approaching vampire helicopters have been shot out the sky by the enchanted bows of soldiers on the wall. He is a part of the fourth wave and is seated beside Lacus in an aircraft.

René is not particularly bothered that Lacus means to fly the plane into the outer defensive wall of Shinjuku itself. He turns to view the large quantities of explosive devices that fill the cargo hold. The aircraft smashes through the tower portion of the wall then explodes, crumbling the wall after it has done so.

He enters by walking into the city from the massive breach western wall. With Lacus pleased with his own work, René states that he should not act so cocky, he was ten feet to the right of the target.[4]

As the ground forces battle against the human defenders, René is beside Lacus in front of a group of vampires that seventh progenitor Ferid Bathory turns to. It is all in order to end this war once and for all, now that the vampire extermination units most strongest members, the Moon Demon Company have come to them. The fighting begins in a full blown extermination effort.

As the battle is underway René has broken away from the fighting to situate himself near Ferid along with Lacus and Mika where he observes the battle. Ordered by Ferid to round up their men and take down all the humans except for the one in charge, Rene answers that Ferid should consider it done. He moves out with Lacus to carry out his duty.

He appears surprised at the Fudo Myo-o spell tag explosion from the on-going battle between Guren and Mika.[5] On their side, vampire nobles Crowley Eusford and with Chess Belle and Horn Skuld have arrived, so the orders have been changed from exterminating to capturing the Moon Demon Company and make them their livestock.

The human forces attempt to retreat yet René has joined Lacus and has members surrounded. He speaks to Norito Goshi that the ways out are as livestock or corpses then asks what is it going to be as he draws his sword. René helps keeps Guren's squad rooted to the spot as the hostage acquiring scenario is underway.

Although successful in essentially capturing them as ordered, René's monitoring of Shigure Yukimi, Goshi, Sayuri Hanayori and Mito Jūjō comes to an end with the timely arrival of Kureto Hīragi leading the Japanese Imperial Demon Army along with Shinya Hīragi.[6]

Having escaped capture, René is dressing himself with Lacus and Mika. With one human causing a colossal amount of damage, René states that the real issue is what that kid was, and whether he was the only one. Hearing that their mission was to actually retrieve an enchantment, René guesses the mission was a failure.

He waits for Mika to talk when Lacus is discussing Ferid, and how he gained favour with Krul. When Mika does not speak after Lacus asks what his story is, René adds that they can always look into his past on their own. Later he is seated beside Lacus on a bench.[7]

Stood in an aircraft hanger with Lacus, he remarks it looks like Mika got the order too when he sees him approach. They have been instructed to move their main units to Nagoya where Tokyo will be hit soon after that.[8]

Arriving in Nagoya, after a helicopter has been completely destroyed by a cursed gear weapon attack from below, René drops down with Lacus. Descending from a helicopter he lands in the midst of Moon Demon Company members. Whilst other vampires who have landed set about restraining them, Rene has stabbed a soldier with his sword.

With Aiko Aihara stating this is a code 284, the humans begin dying and René realizes the humans have poisoned themselves. His reaction is that now they cannot torture them.

Calling for Lacus, he is examining the tattered items of clothing and says to look at this. René observes that several vampires were killed here. From the look of the clothes he would say that fifteenth progenitor Lucal Wesker is dead. Lord René is called by a hooded vampire and alerted that all the vampires underground have been wiped out.

Asking what about lord Mel Stefano, he hears that they searched the tunnels but the nineteenth progenitor cannot be found. Also not liking the strangeness of what is going on, René suggests they get moving. Lord Crowley should be at city hall and he will know what happened here.

As he walks René is ordered to stop right there. He sees Aihara alive and standing as she holds a knife to Mika’s neck. If they make one move then she will slit their friend’s throat. In spite of that, René instructs Mika to capture Aihara since she will prove useful.

Although not bothered about Mika's well-being, René remains where he is as Aihara moves away and interacts with Mika.

He listens to the exchange involving where Aihara's comrades are since her squad could not have been involved in the death of these vampires. René hears Aihara state she will reveal what she knows if she is allowed to live. René is updated that the Imperial Army’s strongest soldiers are at this moment heading to the botanical garden in Higashiyama Park.

Their mission is to execute Zane Lindau. Noting that they know the name of a noble and where he is located, René has a bad feeling. Asked by Lacus what they should do, they have to go and warn Lord Lindau, concerned that they will be in big trouble otherwise and René sets off at once.

When Lacus says they will leave Mika behind if he does not hurry up, René says to also bring that pathetic human. He disagrees with Mika that Aihara has told them everything she knows and they can still get more out of her.

Warning for them to look out, René has seen Aihara with her cursed gear bow, Sankoujitsu, drawn. With Mika killing her to spare Aihara their torture, René comments that the blind loyalty these humans have.

Considering it a little frightening, René voices that the Japanese Imperial Demon Army may prove to be more of a problem then they expected. René intends to head to the botanical garden, they cannot allow the seventeenth progenitor to be killed as well. He hears Mika announce a desire to head to city hall with five borrowed soldiers since they cannot take the human’s word. René answers that is not a bad idea and they will regroup when he is done.[9] It is recalled how they parted ways.[10]

Four months later, René is standing with Lacus, Ferid and Crowley amongst other vampires including Horn and Chess. He awaits a group of aircraft to land which contains vampire nobles including third progenitor, Lest Karr.[11]

René wields a sword in battle.