Owari no Seraph Wiki
Register
Don't have an account?
Sign In
Advertisement
in: Seraph of the End Characters, Deceased, Female Characters,
and 4 more

Kaori Ishihara (Japanese)
Morgan Garrett (English)
Rika Inoue (井上 利香, Inoue Rika?) is a minor character in the Seraph of the End: Vampire Reign manga series. She was a member of the Japanese Imperial Demon Army and Makoto Narumi's squad in the Moon Demon Company. 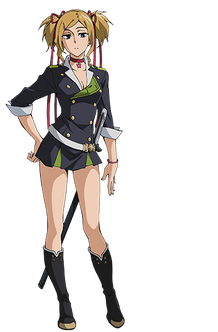 Rika had long blonde hair pulled into two fluffy ponytails with long reddish-rose ribbons holding them in place. She had bangs that are longer on the sides. She wore a hair clip in her bangs, and she wore a reddish-rose choker with a pink butterfly accessory. She had blue eyes.

Her JIDA uniform consisted of a long-sleeved black coat with light green details including the shoulder epaulettes and two rows of gold buttons on the front; she had her sleeves rolled up. She left the top of the jacket unbuttoned which showed some of her cleavage. Along with that, she wore a white web belt with a gold waist-plate. She wore a an extra-short uniform skirt and knee-high black boots. She wore a pink bracelet on her left wrist.

Rika had a free-spirited personality which could be seen from her gal-ish tone and how she wore her uniform.

She took the initiative to be a mood maker, like exchanging high-five with others, and was always contributing to improve the linkage of the squad. She was shown to care a lot about her squad members, even going as far as to threaten Shinoa when they were killed.

Sometime after the Apocalypse, Narumi and Shūsaku rescued her, Yayoi, and Tarō. She then joined the Japanese Imperial Demon Army and later, the Moon Demon Company as part of Narumi's squad.

In Fifteenth Progenitor Lucal Wesker's ward, their team waits for mission start. Narumi briefs the team and scolds Shinoa Squad for not coming prepared. When Tarō Kagiyama and Rika get sick of Yu's behavior, Yayoi tried to calm them down. Rika says she does not trust those kids to watch her back. Narumi becomes their team leader for this mission with Shinoa second-in-command. Narumi scolds Yu again for not remembering the name of their target, but Yu surprises him by listing the names of all of the humans on their team.

The battle starts. When Lucal tries to attack Shihō Kimizuki from behind, Yayoi, Kagiyama, and Rika stab Lucal from behind instead. They eventually succeed in exterminating him.

Their team regroups at the meeting spot. Sergeant Aiko Aihara arrives with only seven surviving team members; although they killed their target, they suffered eight casualties. Guren arrives, and Narumi reports that the rookies did very well. Guren ordered Shinoa Squad and Narumi Squad to join his team to hunt down Thirteenth Progenitor Crowley Eusford, Seventeenth Progenitor Chess Belle, and Seventeenth Progenitor Horn Skuld and to rescue hostages. Guren orders Aiko to wait half an hour for any more survivors and send them to Nagoya Airport.

As Mika engages the Moon Demon Company, Rika and Tarō block one of his attacks.

Shortly after Mika flees with Yu, vampires rain down around the Moon Demon Company.

After seemingly escaping the vampires at Nagoya Airport, Rika approaches Shinoa and grabs her by her bow and yells at her for being alive. In tears, she blames Shinoa for the deaths of her comrades because Shinoa protected a vampire. She punches Shinoa, and Shinoa stops Kimizuki from interfering. Shinoa apologizes, but Rika does not accept it and draws her sword. She knocks Shinoa down and gets on top of her, telling her to apologize with her life. Shinoa orders her squad members against attacking Rika. Rika does not stab Shinoa but yells at her to give her friends back.

Narumi touches Rika's shoulder and tells her to calm down. He says he will take it from here since he is the squad leader.

Later on, a van pulls up, and Aoi Sangū steps out. Although she notices Mitsuba, she quickly turns from her. Then, Kureto Hīragi steps out.

Kureto identifies himself and congratulates them on their successful mission. He says that, thanks to their glorious sacrifices, humanity will now achieve complete victory over vampire-kind. He says he will take over now and orders them to put down their weapons and be at ease.

Shinoa orders them to hold onto their weapons and says she feels that something terrible will happen. Rika, Shūsaku, and Narumi hesitate.

Kureto says that he is in a particularly good mood today, which makes Rika relieved.

Immediately afterward, he says that everyone is going to die anyway and orders the experiment to begin. Aoi launches chains from the ground at the surviving members of the Moon Demon Company. They merely scratch Shinya and fire at the other soldiers. Narumi summons his demon, Genbushin, to protect him and is narrowly able to dodge the chains. However, the chains pierce Rika through the chest and Shūsaku through the shoulder. The chains stab numerous other Moon Demon Company survivors and hang their corpses in the air.