Episode 4
Sannomiya (三宮, Sannomiya?) is a city district in Seraph of the End. Mikaela Hyakuya arrives here to put the humans under vampire protection and turn them into livestock.

Sannomiya, Kobe is a refuge area for humans not associated with the Japanese Imperial Demon Army. They flee from Horsemen and live their days in terror until vampires save them. The humans voluntarily become livestock in order to gain the vampires' protection. 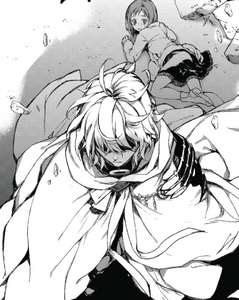 Mika arrives in Sannomiya with Lacus Welt and René Simm. The humans flee from a Horseman as it wrecks their surroundings. One girl trips and falls, and the Horseman moves to kill her. Mika steps between them and slaughters the Horseman with one strike. As the horseman falls, humans cheer for the vampires who have come to save them. Lacus laughs, stating that they are not "protecting" livestock but rather owning them.

René announces that territory will now be ruled by vampires. In exchange for their safety, the vampires request human blood.

Meanwhile, the girl Mika saved pulls down her jacket and the sleeve of her dress to expose her neck better. She offers herself to Mika. Later on, it is revealed that he does not bite her.