Seishirō Hīragi (柊 征志郎, Hīragi Seishirō?) is a minor character of Seraph of the End: Vampire Reign. He is a person of influence as a Major General of the Japanese Imperial Demon Army and a member of the prestigious Hīragi Family.

He appears as a popular student in the Seraph of the End: Guren Ichinose: Catastrophe at Sixteen light novel series. 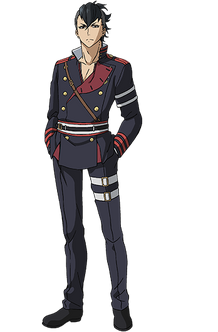 He has black and dark grey hair styled in a Mohawk, and thick, short eyebrows, and narrow red eyes.

Seishirō wears the First Shibuya High Uniform, a black gakuran with a standing collar, with red trim which was also around the cuffs. The school emblem was located on the left breast.

He wears the standard JIDA uniform which consists of a long-sleeved black coat with red details including the shoulder epaulettes which has a brown Sam Browne belt passing diagonally over his right shoulder and two rows of gold buttons on the front which are unbuttoned at the top. Along with that, he wears an armband on his left arm and a black belt inside a white band with red trims. He also wears the uniform trousers with two white belts around his left leg, and black shoes.

Seishirō is rude and has an offensive attitude towards the lower branch families, as shown by his continual disrespect towards Guren Ichinose, even when Guren became Kureto's follower.

He acts very proud, but he uses his father's power and name for protection. Although he feels angry when his father is insulted, he begged for his life when Kureto threatened him.

As both Kureto and Mahiru noted, despite his bravado, in the end Seishirō is nothing but an incompotent useless coward who while acting strong and cruel, has never stood on the front lines, causing both of them to show nothing but utter disgust and no respect at all to him. He has a inferiority complex about Kureto and secretly plans to outwit him someday.

Though born into the Hīragi Family, Seishirō has always been inferior to Mahiru, Kureto, and even Shinya. This inferiority complex is the likely source for Seishirō to always have people to surround him and stroke his ego.

Seishirō first appears, accompanied by lackeys, when he attacks Guren Ichinose at First Shibuya High School. Guren's bodyguard, Shigure Yukimi, attacks Seishirō in retaliation, but a female follower named Yumi blocks Shigure's punch before warning her of Seishirō's identity as a Hīragi. He tells Yumi to stand down so he could beat up Shigure, but his punch is stopped by Shinya Hīragi, who warns him against beating her up as it would make the Hīragis look bad.Seishirō disregards Shinya's warning and punches him before reminding Shinya of his place. He then asks about Guren's strength as he is fighting him in the exams, in which Shinya scornfully tells Seishirō that Guren is truly too weak to defend his friends. This leads to Seishirō to mockingly compare Guren to the cowardice of his father when Sakae went to First Shibuya, and all the students watching laugh.</span>

The next day, Seishirō is assigned Guren's other bodyguard, Sayuri Hanayori, as his opponent for the first part of the qualifying exams, and practically beats her to the extent of her uniform tearing apart. With the encouragement of the crowd, Seishirō decides to strip Sayuri, and continue his beating. Seeing Guren, Seishirō gloats about killing Sayuri in front of him, and challenges him to a fight until Mahiru intervenes. She wrests Sayuri away from Seishirō, and when he is ready to attack her, Mahiru intimidates him to grudgingly back down. Seishirō is declared the winner, and he mocks Guren and Shigure as they leave with a heavily wounded Sayuri.

When it came time for Seishirō to fight Guren the following day, Shinya helps Guren in forfeiting the match, and leads to Seishirō to restart the crowds in mocking the Ichinose. Then when the Brotherhood of a Thousand Nights attack the school, Seishirō, Guren, and Shinya are confronted by Saitō, where Seishirō challenges the Thousand Nights member and gets singled out as a consequence. Seishirō dodges Saitō's chain strikes, unaware that he was being trapped for Saitō to launch a faster chain at him, and had to be literally kicked off the battlefield by Guren.

During the summer season of the school year, Seishirō, accompanied by his lackeys and some of the students, confronts Guren at the school gate upon learning of the Ichinose becoming Kureto's follower. He makes it clear to Guren that his position with Kureto doesn't change his view and treatment of him, but when he states his disapproval of Kureto's choice, only his lackey's laughed with him as the other students are more afraid of Kureto. This and Guren proceeding to walk away raises Seishirō's anger, and he raises his hand out to stop Guren from leaving, but it gets caught by Guren.

When Sehishirō goes for a punch, he is immediately slapped with a fuda on his neck while his punch was still in motion. Guren then grabs the arm to direct the fist next to his face to feign being hit by Sehishirō's punch, and then brings Seishirō on top of him. Guren tells (lies to) him that he is on a secret mission from Tenri, Sehishirō's father and head of the Hīragi Clan, in finding the traitor that helped the Brotherhood of a Thousand Nights attack the school in April. Sehishirō is reassured that he is innocent, but Guren suspects that Kureto might have organized the attack to rid himself of his competition with Mahiru over the Hīragi Clan's leadership position. Sehishirō buys into it, and agrees to aid Guren in taking down Kureto. Not wanting people to suspect what's going on, Sehishirō lands a controlled punch to Guren's face and leaves with his group.

Much later in December, when Guren heads home, Seishirō attacks him with a group of underlings, but Guren defeats them. Shinya saves Seishirō and convinces him to leave Guren alone.

Seishirō first appears during a meeting among the top-ranked members of the Japanese Imperial Demon Army. Guren wonders why a member of the Ichihnose family which is just a branch family is even attending the meeting and Seishirō agrees. He then calls Guren a loser, telling him to leave already.[3][4]

In Nagoya, Seishirō reappears, and on his father's orders, he arrives with some soldiers in order to assist Kureto. He informs Kureto that their father will not tolerate failure, but Kureto laughs and tells him their father can be angry in Hell. The two argue, and Kureto intimidates Seishirō.

When Seishirō calls for backup from his soldiers, he sees that Aoi Sangū and another soldier already took them down. Aoi informs him that preparations are complete.

When Seishirō hears that Kureto is getting on a helicopter, he asks where Kureto is going and says the vampires are headed to Shinjuku to attack them. Kureto states he will imprison the vampires in Nagoya. Seishirō says he will report Kureto for defying their father, so Kureto draws his sword. Seishiro panics and begs for his life. Kureto says that Seishirō's obedience to those in power is useful, so he tells him to wait in the brig until he returns with "supreme power." Kureto does not explain his plans to Seishirō.

He is trapped in the cage next to the Mirai Kimizuki and chained to the bed.[5]

In the Light Novels, Seishirō is shown to be stronger in both his physical abilities and magic than most students, as expected of someone with the Hīragi name; however, his cowardice keeps him from showing these abilities often, and leaves most of the fighting to his aids. When Seishirō does fight, though, he is shown to be faster than Shigure and easily defeated Sayuri in a one on one fight, and is implied to be able to be stronger than Mito and Norito.

However, compared to the older Hīragi siblings, Kureto and Mahiru, Seishirō is no match for them, as Kureto has been shown to easily intimidate him and he envies his strength, while Mahiru easily blocked his finishing attack on Sayuri nonachalantly with her back turned and quickly intimidated him to submission, causing him to back down. Other opponents that are stronger than Seishirō are Guren, as revealed in Book 2, and Shinya.

Kushitamahime (櫛玉姫, Kushitamahime?, lit. "Princess of gem comb"): A demon sealed into a sword. The rank is unknown.

His father and the head of the Hīragi family. He is loyal to him enough to threaten reporting Kureto's actions to him.

His brother and the next head of the Hīragi family. Kureto threatens him when he is about to report Kureto's betrayal and with Aoi reinforcing him at the time, he is powerless to do anything but adhere to Kureto's orders.

Attending a meeting with the lieutenant Colonel, when Guren leaves Seishirō remarks that at least he knows his place and calls him dead weight. He tells Guren they will handle things like they always have, without him.

Seraph of the End: Guren Ichinose: Catastrophe at Sixteen

Seraph of the End: Vampire Reign

Retrieved from "https://owarinoseraph.fandom.com/wiki/Seishir%C5%8D_H%C4%ABragi?oldid=96262"
Community content is available under CC-BY-SA unless otherwise noted.