Owari no Seraph Wiki
Register
Don't have an account?
Sign In
Advertisement
in: Humans, Seraph of the End Characters, Male Characters,
and 5 more

Daisuke Hirakawa (Japanese)
Josh Grelle (English)
Shūsaku Iwasaki (岩崎 秀作, Iwasaki Shūsaku?) is a minor character in both Seraph of the End: Guren Ichinose: Catastrophe at Sixteen and Resurrection at Nineteen. He also holds a minor role in the Seraph of the End: Vampire Reign manga series. He was a member of the Japanese Imperial Demon Army and Makoto Narumi's squad in the Moon Demon Company. 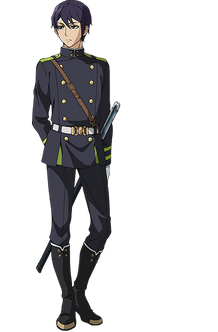 He wears the standard JIDA uniform which consists of a long-sleeved black coat with light green details including the shoulder epaulettes which had a brown Sam Browne belt passing diagonally over his right shoulder and two rows of gold buttons on the front. Along with that, he wore a pair of white gloves and a white web belt with a gold waist-plate. He also wore the uniform trousers and knee-high black boots which goes over his trouser's leggings.

Shūsaku was quiet and focused. He is a strong player with both wisdom and courage, supporting Narumi in terms of tactics. Upon Narumi's squad being joined with Shinoa's squad, where the others viewed the latter as a burden, he stated that with their raw power and training they could turn out to be useful.

Like Makoto's family, he belongs to a retainer house that serves the Ichinoses. His mother, Shien Iwasaki, was a famous sorceress who often traveled the country because of her celebrity status in magic circles, and as such was rarely at home to be a part of Shūsaku's day to day upbringing. Even so, she made him croquettes, the only thing she could cook, and that became his favorite food.

He was Makoto's prospective retainer and as such had been raised side by side. They went to the same preschool and the world ended when they were in elementary school together.

Both of them grew up in Nagoya before the apocalypse which made for a dangerous journey north to Shibuya. Sometime during this, they rescued their future squad members Rika, Yayoi and Tarō. They then joined the Japanese Imperial Demon Army and later the Moon Demon Company.

At Sakae Ichinose’s funeral, Narumi and Shūsaku ask Guren if the Imperial Moon will be treated like this for the rest of their lives, and Guren tells them to endure it and support him for now.

Narumi Squad pairs up with Shinoa Squad to exterminate vampire nobles in Nagoya. Sergeant Makoto Narumi introduces himself to Yūichirō Hyakuya, and Yu tricks Narumi into believing he is twenty years old.

In Fifteenth Progenitor Lucal Wesker's ward, their team waits for their mission to start. Narumi briefs the team and scolds Shinoa Squad for not coming prepared. Shūsaku keeps time before the mission. He briefs the team about their orders once again. Narumi becomes their team leader for this mission with Shinoa second-in-command. Narumi scolds Yu again for not remembering the name of their target, but Yu surprises him by listing the names of all of the members on their team.

The battle starts. When Lucal tries to attack Shihō Kimizuki from behind, Yayoi, Kagiyama, and Rika stab him from behind instead. Shūsaku takes the opportunity to bind Lucal's left arm. Unable to remove it, Lucal is forced to cut off his own arm in order to escape. They eventually succeed in exterminating him.

On the streets of Nagoya, Shinoa Squad and Narumi Squad wait for the survivors to regroup. Sergeant Aiko Aihara arrives with a bruised, battered, and bleeding face. Kimizuki notes that Aiko Aihara's squad only has seven survivors, so eight of them died. Yu offers to have his squad take watch while hers rests, and she takes him up on it. Guren and his squad come above ground, but they are all worse for the wear. Narumi reports that Shinoa Squad did very well.

As Mika engages the Moon Demon Company, as soon as he sees Yu, he leaves his fight with Narumi, Rika and Tarō and jumps past Shūsaku and Yayoi.

Shortly after Mika flees with Yu, vampires rain down around the Moon Demon Company.

After seemingly escaping the vampires, at Nagoya Airport, a van pulls up, and Aoi Sangū steps out. Although she notices Mitsuba, she quickly turns from her. Then, Kureto Hīragi steps out.

Kureto identifies himself and congratulates them on their successful mission. He says that, thanks to their glorious sacrifices, humanity will now achieve complete victory over vampire-kind. He says he will take over now and orders them to put down their weapons and be at ease.

Shinoa orders them to hold onto their weapons and says she feels that something terrible will happen. Rika, Shūsaku, and Narumi hesitate.

Immediately afterward, he says that everyone is going to die anyway and orders the experiment to begin. Aoi launches chains from the ground at the surviving members of the Moon Demon Company. They merely scratch Shinya and fire at the other soldiers. Narumi summons his demon, Genbushin, to protect him and is narrowly able to dodge the chains. However, the chains pierce Rika through the chest and Shūsaku through the shoulder. The chains stab numerous other Moon Demon Company survivors and hang their corpses in the air.

Narumi falls to his knees, asking what just happened. Shūsaku screams at Narumi to run until a second chain pierces through his chest.

Three months later, it's revealed that Seventh Progenitor Ferid Bathory obtained Shūsaku's body and is currently keeping it preserved in the basement of his mansion in Osaka Bay.

Makoto mentions that ever since he was little, Shūsaku had a natural talent for magic.[2]

Shūsaku, like all people who wield Cursed Gear, had heightened strength and regeneration abilities.