Episode 2
Shibuya (渋谷区, Shibuya-ku?) in Seraph of the End is the first capital of the Japanese Imperial Demon Army. It contains the JIDA's headquarters and is home to many noble families, such as the Hīragi, Ichinose, and Sangū.

The city has been well-kept and appears to be a human city prior to the Apocalypse. It is a city with many buildings, including schools. The Moon Demon Company barracks lie underneath one of the high schools. The city is surrounded by defensive walls that are a few stories high.

The main headquarters of the JIDA are here as well.

The society operates similarly to human society prior to the Apocalypse and even has ice cream and schools. This society is completely controlled by the Hīragi family and their subordinate families. Many humans live here in peace.

However, vampire experimentation is performed here, and vampires can escape from their research facilities on rare occasions. Human experimentation is performed extensively, and Second Shibuya High is an experimental ground that exposes the humans in the school to demonic auras. Humans who are possessed are typically killed by the demons or executed by the army, while those who have resistance to the demons are used as soldiers. The Moon Demon Company has barracks beneath the high school and trains its soldiers there.

This city has strict population regulations on immigrants but encourages its own soldiers and citizens to proliferate. Even after its soldiers kill off the vampires protecting human livestock, the city will not allow any of the people entry depending on how full it is and will leave them to the vampires and Horsemen outside the walls. 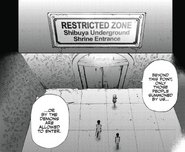 As punishment for disobeying orders, Yūichirō Hyakuya is sentenced to high school until he can make a friend. While there, a weak and starving vampire escapes from a research facility. Yu, with help from Yoichi is able to defend the other students until Guren Ichinose arrives with the Moon Demon Company and exterminates the vampire.

In the Moon Demon Company, Yu becomes a special private and trains in their classroom alongside Yoichi and Kimizuki. He joins Shinoa Hīragi Squad after acquiring a Black Demon Series weapon.

Kureto stages his coup on Shibuya by using Mirai to attack the city while he goes in to kill his father.

Outside the city Yu is brought before Saitō after a Hyakuya agent managed to kidnap Yu from within the city before Shibuya is affected by fires as the Hyakuya Sect attack the Japanese Imperial Demon Army stationed there.[1]