Owari no Seraph Wiki
Register
Don't have an account?
Sign In
Advertisement
in: Seraph of the End Characters, Deceased, Male Characters,
and 4 more

Takanori Hoshino (Japanese)
Chris Guerrero (English)
Tarō Kagiyama (鍵山 太郎, Kagiyama Tarō?) is a minor character in the Seraph of the End: Vampire Reign manga series. He was a member of the Japanese Imperial Demon Army and Makoto Narumi's squad in the Moon Demon Company. 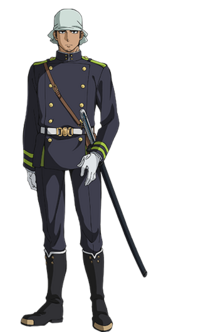 Tarō was a tall, muscular young man that wore a pale blue cloth that covered the top of his head above his eyes. He had short black hair with sideburns, and he also had some hair on his chin.

He wore the standard JIDA uniform which consisted of a long-sleeved black coat with light green details including the shoulder epaulettes which have a Sam Browne belt passing diagonally over his right shoulder and two rows of gold buttons on the front. Along with that, he wore a pair of white gloves and a white web belt with a gold waist-plate. He wore the uniform trousers and black boots which go over the trouser's leggings.

Tarō was a serious person as is he wanted to make Yu apologize for his behavior. It is rare to seem him smile at others except for his own squad. He also had a very strong sense of justice.

Sometime after the Apocalypse, Narumi and Shūsaku rescued him, Rika, and Yayoi. He then joined the Japanese Imperial Demon Army and later, the Moon Demon Company as part of Narumi's squad.

Narumi Squad pairs up with Shinoa Squad to exterminate vampire nobles in Nagoya. Narumi introduces himself to Yūichirō Hyakuya, and Yu tricks him into believing he is twenty years old.

When Shinoa Squad faces off against Lieutenant Colonel Guren Ichinose, Colonel Mito Jūjō, and Major General Shinya Hīragi in a practice battle, Guren announces their real ages after trouncing them.

In Fifteenth Progenitor Lucal Wesker's ward, their team waits for the mission start. Narumi briefs the team and scolds Shinoa Squad for not coming prepared. When Tarō and Rika Inoue get sick of Yu's behavior, Yayoi Endō tries to calm them down. Narumi becomes their team leader for this mission with Shinoa second-in-command. Narumi scolds Yu again for not remembering the name of their target, but Yu surprises him by listing the names of all of the humans on their team.

The battle starts. When Lucal tries to attack Shihō Kimizuki from behind, Yayoi, Kagiyama, and Rika stab Lucal from behind instead. They eventually succeed in exterminating him.

Mika evades Kagiyama's attacks, and after Shinoa Squad protects and allows Mika to escape, Shinya orders them all to move now. Common vampire soldiers jump down from the helicopters, surprising them in the midst of their drama. One cuts through Yayoi's left side above the hip, causing extensive blood loss as she falls to the ground. Enraged, Tarō curses him and charges in to attack. Narumi tries to stop him but he doesn't listen. He and the vampire stab each other through their torsos simultaneously. Blood sprays out of Tarō's mouth as he too is killed in the ambush. Seeing his squad members die before him, Narumi curses the vampires.