Owari no Seraph Wiki
Register
Don't have an account?
Sign In
Advertisement
in: Humans, Seraph of the End Characters, Male Characters,
and 5 more

Keiji Fujiwara (Japanese)
Christopher R. Sabat (English)
Tenri Hīragi (柊 天理, Hīragi Tenri?) was the General of the Japanese Imperial Demon Army and the former leader of the Hīragi Family. He was the strongest character to ever appear in the series, however he was never shown fighting. His strength was purely from tales of which describe him beating the previous vampire Queen and he also took out most of the nobles. 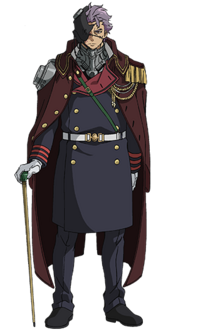 Tenri had a large build and ashen hair similar to Mahiru and Shinoa and amber eyes. The right side of his face had curse marks, and covered over by a black patch, which goes over his eye, the right side of his head, and connects to his neck. His right shoulder and neck appears to be mechanical.

In the Catastrophe manga, he did not yet wear an eye patch or anything that looked mechanical. He was not seen as using a cane.

He wore the JIDA uniform which consists of a long-sleeved black coat with red details, two rows of gold buttons and a green Sam Browne belt passing diagonally over his right shoulder. Over this is a maroon military overcoat with shoulder epaulettes which have a gold bullion fringe along with an aiguillette on his left shoulder. He also wore a pair of white gloves and the uniform trousers with black shoes.

Tenri was best described as a proud and harsh individual. Like the rest of the Hīragi family (with the exception of Shinoa and Mahiru), he looks down on lower houses and made sure that they knew their place. He did not hesitate to use violence or cruelty and taunted Guren about forcing his father, Sakae Ichinose, to dance naked in front of them prior to having Sakae beheaded.

Idealistically, he strongly believed in the concept of survival of the fittest. Due to the weight of this savage principle he abided by, he would have seen that the strong lived and the weak died. He did not especially value his children's lives either and even gave Guren permission to kill Seishirō because he was fooled by Guren.

Furthermore, Tenri was not at all happy with Guren's defiant attitude.

As seen in his last moments, Tenri has showcased that he still retains a level of empathy and regret for his actions, this is seen where he admitted that he was jealous of his son Kureto for managing to defeat him while retaining his "humanity" and implied that he harbored some regret for having killed his siblings to become the "king".

Tenri was born to the Hīragi family. He had 40 other siblings who he killed to become the leader of the family.

He had people use his sperm to impregnate demon-possessed women, and only Mahiru and Shinoa survived that experiment.

Awhile after Sakae Ichinose's execution is broadcast on television to teach the Ichinoses their place, Tenri Hīragi summons Guren Ichinose in order to approve of him as head of the Ichinose Clan. He insults Guren, noting that he was weaker than even his idiotic deceased father by showing open hatred and fury at him, noting mockingly that at least his father managed to keep smiling even when he forced Sakae to dance naked in front of them, orders him to kneel and even stomps on Guren's head until it bleeds. After Guren is able to survive without retaliating, Tenri, seemingly approving of his strength, accepts him as the new leader of the Ichinose and tells him to leave and continue to serve the Hīragi faithfully.

He first appears in chapter 5 at the Japanese Imperial Demon Army Headquarters in Shibuya. There is an expansive political meeting taking place, but Guren is sleeping and snoring. Tenri tells him that he should know his place. Guren sarcastically apologizes to him and says he was bored and Tenri replies he should not get full of himself and was about to beat him when Shinya defended him, much to Tenri's irritation. However he does not react when Guren leaves the meeting, neither when Seishiro disparages Guren.[2]

Tenri shows up near the end of chapter 56, when Kureto launches his attack on the JIDA Headquarters in Shibuya. He holds himself with a few soldiers in the Audience Chamber until Kureto confronts him. Tenri then initiates the fight by launching enchanted chains from his body as Kureto charges. The fight continues in the next chapter, where Tenri acknowledges Kureto's strengths and mocks him for his care for others, like Aoi Sangū, as he claims that the head of the Hīragi Clan has no need for friends.

Tenri then distracts Kureto by sending his chains at Aoi, and disarms him by slicing off the lower half of Kureto's arm. Tenri continues to mock the wounded Kureto, and even questions him if his abilities will ever surpass Mahiru's. His son then gives a smirk as he tells Tenri he talks a lot, before a blast from Abaddon hits the building floor the two are on in less than a second. Tenri's lower body is incinerated before he is impaled through the throat by Kureto and pinned to another building.

In his final moments, Tenri tells Kureto about the god that has cursed and had been controlling the Hīragi Family, and his son will inherit it. He tells Kureto to trust no one, and to always carry himself, as he has shown to be better than Mahiru and himself. Tenri continues to commend Kureto for being able to retain his humanity when he couldn't by revealing that he killed his forty siblings to claim the throne. Then with his dying breath, Tenri confirms Kureto as the heir to the Hīragi Family.

As the former head of the Hīragi family, it is assumed that Tenri was an extremely powerful combatant. Although his strength was never shown, Guren openly noted his power was the greatest out of all the other family heads and oppressed even him. As he was capable of casually making Guren's head bleed badly, even prolonging the regeneration process offered by Noya, it can be assumed he has tremendous physical strength. Tenri had also threatened confidently to beat Guren, suggesting he was assured that his strength surpassed Guren even as an adult. In addition, Kureto noted that his father's power was inhuman and acknowledged he was doubtful of being capable of defeating him. Chapter 57 revealed that Tenri was possessed by Shikama Dōji, the former First Progenitor of the vampires, which implied that every head of the family would be possessed by this demon; however, whether or not this demon could increase the strength or magical abilities of his hosts is currently unknown.

Tenri could release chains from his body like Saitō, except Tenri's would have the ends turn into snake heads. Also like Saitō, the chains keep Tenri's body together, which meant that he could detach and reattach parts of his body; such as when he launches his head away from his body to avoid getting his head cut off by Kureto.

Seraph of the End: Guren Ichinose: Catastrophe at Sixteen

Seraph of the End: Vampire Reign