The Great Birthday Surprise: The Target is Guren Ichinose (華麗なる誕生日（バースデー）サプライズ ～ターゲットは一瀬グレン～) was an event in the Seraph of the End: Bloody Blades game that ran from August 23, 2016 to the game's closure on September 29, 2016.

During the event period, players were able to run the event quest in order to collect the event-exclusive item, Guren's Treasured Photo (グレンの秘蔵写真, Guren no Hizō Shashin?). Collecting this would allow the players to draw from the Event Gacha at the summoning page.

Players also stood a chance to get a copy of a random character from the Event Gacha after successfully clearing the event stage. 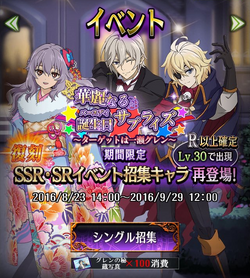 During this event, the Event Gacha pool consisted of all characters that were obtainable only through the Event Gacha in all past item events, including SSR and SR rarity cards.

As with all past Event Gacha instances, a single draw requires 100 event items.

The characters that were obtainable during this period were:

Cards that were obtainable from drops during the event period were:

Community content is available under CC-BY-SA unless otherwise noted.