Seraph of the End 11

208
Seraph of the End 11 (終わりのセラフ 11, Owari no Serafu 11?) is the eleventh volume of the Seraph of the End: Vampire Reign manga, written by Takaya Kagami and illustrated by Yamato Yamamoto.

This section, or a part of it, has been transcluded from Volume 1; any changes involving it should be made there instead.

After trumpets of the apocalypse proclaim the fall of humanity, vampires arise from the shadows to rule the earth. Yūichirō wants just one thing—to get revenge by killing each and every vampire.

Mika and Yūichirō are finally reunited! With Mika on the brink of death, Yu offers his blood to save his friend’s life — which turns Mika into a full-fledged vampire! Meanwhile, the captured Guren is attempting to lead the vampires into a trap set by Kureto, who plans to end this battle once and for all using the Seraph of the End! All groups descend on Nagoya Airport for an all-out war!

Volume eleven's cover displays Shinya relaxing with his Cursed Gear rifle, with the white tiger manifestations of Byakkomaru around him. Depicted in color, Shinya's platinum blond hair and icy blue eyes are similar to that of the tigers. Where Byakkomaru's projectiles are often seen violently ramming into targets to destroy them, here two of them appear at ease at contact with Shinya. The tiger on the left of the image has its paw on Shinya's leg, where he is sat on white marble appearing steps. Wearing his dark colored Japanese Imperial Demon Army uniform, Shinya rests his black colored rifle in his shoulder. Both uniform and weapon are decorated in golden colored designs.

Story and character overview at the beginning 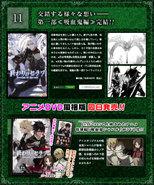 Information about the eleventh and bonus volumes on the official website