Seraph of the End 8

200
Seraph of the End 8 (終わりのセラフ 8, Owari no Serafu 8?) is the eighth volume of the Seraph of the End: Vampire Reign manga, written by Takaya Kagami and illustrated by Yamato Yamamoto.

A special edition of the volume was released on the same day.

This section, or a part of it, has been transcluded from Volume 1; any changes involving it should be made there instead.

After trumpets of the apocalypse proclaim the fall of humanity, vampires arise from the shadows to rule the earth. Yūichirō wants just one thing—to get revenge by killing each and every vampire.

The attack on Nagoya begins! The Japanese Imperial Demon Army descends on the vampire nobles, aiming to exterminate them completely. Three squads are assigned to take down each of eight nobles. Because they are undermanned in comparison, Shinoa and Narumi squads will have to work together seamlessly to take down their one noble. But lurking amongst the nobles is Crowley Eusford, a formidable vampire eager to drink dry his would-be vanquishers.

Volume eight's cover features Guren drawing his Cursed Gear sword, Mahiru-no-Yo, with the titular demon themselves visible to the left of the image. Standing within a location containing black walls with vertical straight lines adorning them, Guren is depicted in color with his black hair and violet eyes shown. Wearing his Japanese Imperial Demon Army uniform, Guren is also wearing a high collared black cloak that he is rarely seen wearing, of which the red interior is visible where it flows around him. The long sheath to his weapon goes off of the image at the bottom. In drawing his sword which has two tassels on the two handed hilt, the glowing crimson blade stands out, where it emits a pale red, spectral like energy.

For where Guren is standing on, while they resemble ripples in a puddle, it is more probable that the expanding circles around Guren's feet have been decoratively placed into the floor. All of various sizes, and overlapping one-another, where some circles appear carved into what could be stonework, other lines to the circles are interrupted seemingly depending on the light. A possibility is that they may be Spell Circles. In any case, the floor's surface is dark yet very reflective.

On the left side of the image, Mahiru-no-Yo, the demon within the sword, is either being reflected or literally appearing there where they share Guren's smiling expression. Around their legs it appears as though they are reflected in a surface of water, yet around the face it is far more clear despite there being ripples there too. There is a faint light seen in the lower section to the surface, as if coming in from a forest canopy. Such light is also shining on the top of Guren's head, largely on the right such as on his face and shoulder. The cursed gear room where black demon weapons are kept in Shibuya is the likeliest location for a setting otherwise not seen in the series.

Story and character overview at the beginning 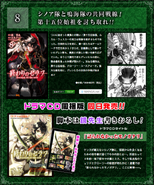 Information about the eighth and bonus volumes on the official website