Yūichirō Hyakuya (百夜 優一郎, Hyakuya Yūichirō?) is the main protagonist of the Seraph of the End anime. Taken to an underground vampire city after the world collapsed, Yu attempted to escape with Mikaela Hyakuya and the rest of his orphanage family. He became a member of the Japanese Imperial Demon Army as well as Shinoa Hīragi's squad in the Moon Demon Company.

Set on vengeance against the vampires, Yu acquired a cursed gear sword and complied with Lieutenant Colonel Guren Ichinose's orders to wipe out a vampire base and free the humans kept there. Yu would head to defend the city of Shinjuku from a vampire invasion where he would lose control as a one winged hybrid being.

He then joined other squads in a mission targeting vampire nobles in Nagoya. There in response to a seraph summoning the demon Adaddon to the world, Yu would himself be transformed into the second trumpet with the powers to vanquish the threat. 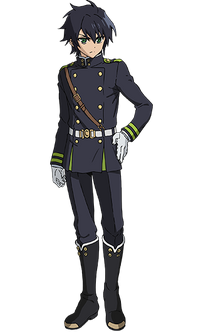 He has medium length black hair which can be considered quite neat and messy at the same time. Yu possesses sharp green eyes which fall under his eyebrows. His eyes are large compared to most other males in the series.

As a child raised as livestock, Yu wears the standard white uniform with short sleeves and a hood.

His school uniform consists of a gakuran with a standing collar that is black with teal trim. The collar and the top buttons of the jacket are unbuttoned, revealing is a white shirt underneath.

He wielded a standard demon katana until he was promoted into the Moon Demon Company. As a private of the Demon Army, Yu wears the conventional JIDA uniform which consists of a long-sleeved black coat with light green details including the shoulder epaulettes. These have a brown Sam Browne belt passing diagonally over his right shoulder and two rows of gold buttons on the front. Along with that, he wears a pair of white gloves and a white web belt with a gold waist-plate. Yu also wears the uniform trousers and black boots which go over the trousers' leggings. Yu keeps his katana on the left side of his hip. Sometimes he can be seen wearing the JIDA hat, and often wears the JIDA cape as well.

Yu's eyes become scarlet and he sprouts two black horns from his head, His teeth become pointed while curse marks appear on the side of his face.

Seraph of the End[]

In his incomplete seraph form, Yu's left eye turns into a black pit and his right eye becomes red and bleeds. He has an exceptionally large branched wing-like structure that emerges from his upper left shoulder. As a full seraph, Yu has a single pair of irregular black wings both of his sclera are dark with gold irises, and the edges of his hair become white.

Up until his teenage years, Yu started off as moody and antisocial due to the tragedies during his childhood. As a young child, he saw himself as a demon in the figure of speech sense that no one would love. At first, Yu wanted nothing to do with Mika and the other Hyakuya orphans.

Having a casual attitude to physical violence causes Yu to run to tackle a vampire as a child and older he is indifferent to being punched and returning them as when he fought with Kimizuki. He tells Mistuba to punch him as much as she wants if it will make her feel better. Even after spending time with Shinoa and Yoichi, Yu had not mellowed around others. Refusing to introduce himself to his classmates, Yu instead called them weaklings that can become vampire food for all he cares. Confrontational when he returned Kimizuki's punch to trying to take a cursed gear weapon from Shinoa by force. He usually speaks of his intent such as when he asked what Kimizuki’s test score is and it had better be epic or he would pop him one for being arrogant.

Although confrontational he takes the blame for being late to spare Shinoa and the squad from being chastised, even when being shouted at he responded with an apology. His urge to acquire power makes him headstrong and he is vocal in his own abilities, confidant that he will be slaying monsters dusk until dawn. Another sense of bravado is that he will kill fifty of them with his eyes closed.

With weaknesses’ pointed out he will adapt them if it helps him achieve a goal. With Mika’s rescue being a possibility, Yu asked Guren to teach him the proper way of using his cursed gear to become a better fighter. He can be flippantly dismissive to what he does not feel is necessary such as the need to remember a target’s name. Instead Yu uses his good memory to remember the names of those he is to protect. His habit of speaking his mind and not having time for protocol with higher ranked army members can make him seem as if he is not being serious but he is, just in a different way.

He uses different words as substitutes for what he means to say, calling Lucal that “Loo-loo la-la guy” and agreeing that he and Mika should leave the Moon Demon Company when it was the Imperial Demon Army that were more problematic. Thinking simply out of practicality, Yu often tries to simplify serious matters. For example Abaddon is a gigantic, winged insectoid like creature emerging from a seraph girl’s back that is producing Four Horsemen of John and stopping Mika from healing. Yu refers to such an entity as “that big monster” where all he needs to do is kill it to make everything better.

Although it takes time, Yu is most passionate to notions of comradeship especially amongst members of the wider army. He was in favour of saving hostages and physically confronted Narumi when he said to leave them behind. His idea of what constitutes a family is also a significant feature of his personality. He felt no ill will towards a child who acted to defend those close to her. Yu feels he can never repay people for giving him a reason to live and has no qualms about being used, whether by Guren or Mika.

Whilst he initially wanted to and did fight vampires out of vengeance he came to almost enjoy defeating them. His deeply rooted opposition to them is a guiding force in his life, the only exception concerns Mika who he does not treat as other vampires, however he still continues to use the term bloodsucker even after meeting Mika. After wanting to reclaim Mika became a driving focus for Yu, Asuramaru was concerned that Yu had forgetton his desire for revenge, but Yu is still obsessed with family. When they are in danger of being harmed Yu loses all sense of what is right or wrong though this may be in the context of whether it is right to turn into a partial demon to rescue someone.

Happy at things like seeing a car being hotwired, Yu is filled with wonder that he can drive. His sense of humor includes commenting that he did not know he was so popular when hearing the exceptionally serious matter that he was being targeted by both vampires and humans.

He yells in a mix of pain and rage in the uncontrollable state of being a demon. With a horn stabbing out his head Yu becomes sure of himself, convinced that he has the power to take a vampire nobles head in a fight he enjoys where he felt powerless before. Able to recognize others, he does not want them interfering in his battle.

Seraph of the End[]

During his first transformation, he goes berserk and attacked specific targets. He struck then pursued Crowley to attack him again. After resuming his lethargic manner of walking, he spotted Shinoa and ran to angrily assault her. Even with his sword through Mika he paid no mind to him in his goal of trying to stab a human consistant with his muttering that sinners must die, and he must kill all sinners.Upon his second transformation, he is more sure of the need to destroy humanity and the world. He curses the tainted humans and plans to turn them into "pillars of salt." Coming under the fire from Mirai and Abaddon, Yu remained calm and steadily made his way to deal with that foe before turning his attention back to humans. Whilst he could see him, Yu did not react to Asuramaru, a demon.

At the Hyakuya orphanage, Yu was introduced by the director as the newest member of the family. He was approached by Mika with Ako and another orphan but hearing Mika speak of the notion of family, Yu asks if he thinks that means anything to him. He is here because his dad went crazy and tried to kill him, and his mom was so convinced that Yu was a demon that she committed suicide. Yu did not want Mika's offer of family.

For the comprehensive account of Yu's experiences in the Seraph of the End anime view:

Yu has a natural resistance to demons such as the power given off by Mahiru-no-Yo that rendered virtually everyone else in the class unconscious from its crushing power. His abilities with a sword allow him to put up a good fight against monsters such as Four Horseman of John, and agile vampires with supernatural strengths. One tenth of his being is not human, rather part seraph specifically the King of Salt where in that state Yu possesses tremendous analogous abilities.

When Yu was patrolling outside he wielded a katana sword to battle Four Horseman of John. He would keep such a weapon within his locker and retrieve it to fight an escaped vampire who had taken a student hostage.

Yu's cursed gear is Asuramaru, of which the physical weapon is a green katana.