Owari no Seraph Wiki
Register
Don't have an account?
Sign In
Advertisement
in: Seraph of the End Characters, Deceased, Female Characters,
and 4 more

Emiri Katō (Japanese)
Tabitha Ray (English)
Yayoi Endō (円藤 弥生, Endō Yayoi?) is a minor character in the Seraph of the End: Vampire Reign manga series. She was a member of the Japanese Imperial Demon Army and Makoto Narumi's squad in the Moon Demon Company. 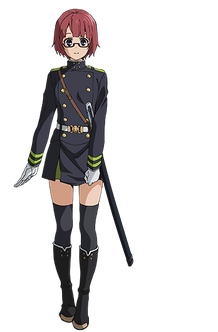 Yayoi was a petite girl with short red hair shaped into a bob and straight bangs cut over her purple eyes. She wore red glasses.

She wore the standard JIDA uniform which consisted of a long-sleeved black coat with light green details including the shoulder epaulettes. which have a Sam Browne belt passing diagonally over her right shoulder and two rows of gold buttons on the front. Along with that, she wore a pair of white gloves and a white web belt with a gold waist-plate. She also wore the standard black skirt, dark gray thigh-high socks and knee-high black boots.

She is the kind-hearted peace keeper of the belligerent Narumi squad, and was relied on to provide intel regarding Lucal Wesker's movements, which she done effectively.

Contrary to her quiet looks, she was brave and had a firm attitude when confronting vampires, taking part in group attacks and attacking gallantly by herself.

Sometime after the Apocalypse, Narumi and Shūsaku rescued her, Rika, and Tarō. She then joined the Japanese Imperial Demon Army and later, the Moon Demon Company as part of Narumi's squad.

Narumi Squad pairs up with Shinoa Squad to exterminate vampire nobles in Nagoya. Sergeant Makoto Narumi introduces himself to Yūichirō Hyakuya, and Yu tricks Narumi into believing he is twenty years old.

In Fifteenth Progenitor lucal Wesker's ward, their team waits for mission start. Narumi briefs the team and scolds Shinoa Squad for not coming prepared. When Tarō Kagiyama and Rika Inoue get sick of Yu's behavior, Yayoi tries to calm them down. Narumi becomes their team leader for this mission with Shinoa second-in-command. Narumi scolds Yu again for not remembering the name of their target, but Yu surprises him by listing the names of all of the humans on their team.

The battle starts. When Lucal tries to attack Shihō Kimizuki from behind, Yayoi, Kagiyama, and Rika stab him from behind instead. They eventually succeed in exterminating him.

Narumi Squad reappears after Kimizuki captures Yu, having already rescued the hostages. Shinoa Squad joins up with them and many injured soldiers. They flee, and Rika Inoue reports seeing a single vampire straight ahead. Shinya says they can handle one noble and orders them to keep pushing forward.

After Shinoa Squad protects and allows Mika to escape, Shinya orders them all to move now. Common vampire soldiers jump down from the helicopters, surprising them in the midst of their drama. One cuts through Yayoi's left side above the hip, causing blood to spray all around her as she falls to the ground. Enraged, Tarō curses him and charges in to attack. Narumi tries to stop him but he doesn't listen. He stabs the vampire through the torso while the vampire stabs him through the chest simultaneously. Blood sprays out of Tarō's mouth. Seeing his squad members die before him, Narumi curses the vampires.

Yayoi, like all users of Cursed Gears, have heightened physical abilities.